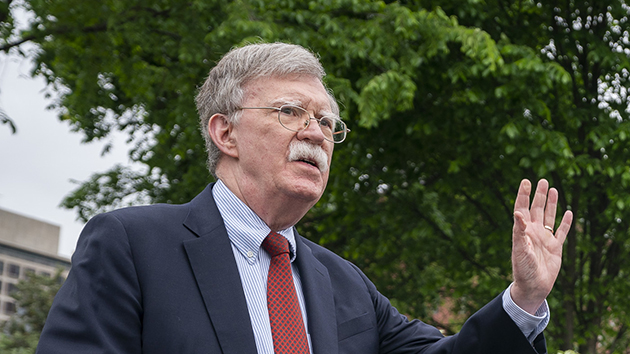 (Official White House Photo by Tia Dufour)(WASHINGTON) — Former National Security Adviser John Bolton has been formally asked to testify before House investigators in the ongoing impeachment inquiry, a person familiar with the matter confirmed to ABC News Wednesday.Bolton, whose name has surfaced repeatedly as being opposed to President Donald Trump’s pressure campaign with Ukraine, has been asked to appear on Capitol Hill next week, on Nov. 7.In addition to Bolton, the person said two White House lawyers, John Eisenberg and Michael Ellis, have also been called to testify. It was not immediately clear whether Bolton, Eisenberg, and Ellis would comply with the request.

A former U.N. Ambassador during the George W. Bush administration, Bolton was tapped as Trump’s third national security adviser before his departure last month amid reports of conflict with Trump and top White House advisers on key foreign policy issues.While sources have told ABC News that Bolton was not listening in on the president’s July 25 phone call with Ukrainian President Volodymyr Zelenskiy, they say he could provide a fuller road map into President Trump’s personal attorney Rudy Giuliani’s dealings with Ukraine.Fiona Hill, who handled Russian and European Affairs for the National Security Council under Bolton before leaving the White House in early July, testified before impeachment investigators earlier this month for nearly 10 hours.Hill told lawmakers she raised concerns inside the White House and NSC about the early recall of U.S. Ambassador to Ukraine Marie Yovanovitch, as well as the work of Giuliani on matters related to Ukraine, according to sources familiar with her testimony.Behind closed doors, she told lawmakers that Bolton had once referred to Giuliani as a “hand grenade” who would “blow everybody up,” according to sources familiar with her testimony, the details of which were first reported by the New York Times.Bolton, Hill told investigators, told her to raise concerns about Giuliani and his dealings with Ukraine with John Eisenberg, a National Security Council lawyer, following meetings with Gordon Sondland, the U.S. Ambassador to the European Union, who testified under subpoena earlier this month.Sources familiar with his thinking tell ABC News that Bolton is open to speaking with congressional investigators.In the case of Eisenberg and Ellis, the White House has sought to block administration officials from cooperating, though some have testified under subpoena from Hill investigators.The White House did not immediately respond to a request for comment.Copyright © 2019, ABC Audio. All rights reserved.