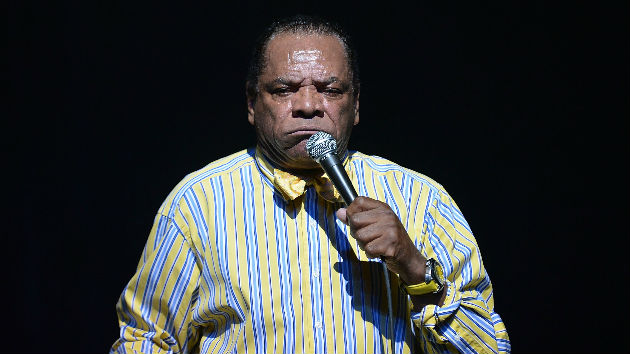 Photo by Vallery Jean/WireImage(LOS ANGELES) —  He was best known to most as Ice Cube’s no-nonsense dad in Friday, and as Pops opposite Shawn and Marlon Wayans on The Wayans Bros.  Actor and comic John Witherspoon has died at age 77.

“It is with deep sadness we have to tweet this, but our husband & father John Witherspoon has passed away,” reads a family statement on Witherspoon’s Twitter.  “He was a Legend in the entertainment industry, and a father figure to all who watched him over the years. We love you “POPS” always & forever.”

As of Wednesday morning, no cause of death had been provided.

Witherspoon, who was born John Weatherspoon in Detroit, began working as a stand-up comic in the 1960s and 70s, where he befriended fellow stand-up comic David Letterman, who later became godfather to Witherspoon’s sons.  Witherspoon soon added acting to his resume, making his first television appearance on the 1970s Buddy Ebsen detective drama Barnaby Jones.  Witherspoon became a regular presence on TV, mostly in sitcoms and comedies, which included WKRP in Cincinnati, Good Times, What’s Happening!, and The Richard Pryor Show.

Witherspoon’s biggest TV role was starring as Pops on The Wayans Bros. for the show’s five-season run, which ended in 1999.  More recently, he starred opposite Tracy Morgan on the latter’s The Tracy Morgan Show, which lasted a single season, ending in 2004.  He also appeared in two episodes of the ABC sitcom black-ish.

Withersooon’s first credited film role was in the 1980 Neil Diamond remake of The Jazz Singer but as he did in television, he was best known for guest roles in comedies including the 1988 action film parody I’m Gonna Git You Sucka and 2004’s Soul Plane.  But Witherspoon’s best-known film role was as Ice Cube’s dad, Willie Jones, in 1995’s Friday and its sequels, Next Friday and Friday After Next.  Witherspoon was slated to reprise the role in yet another sequel, Last Friday.

Witherspoon is survived by his wife of over 30 years, Angela Robinson, and two sons.