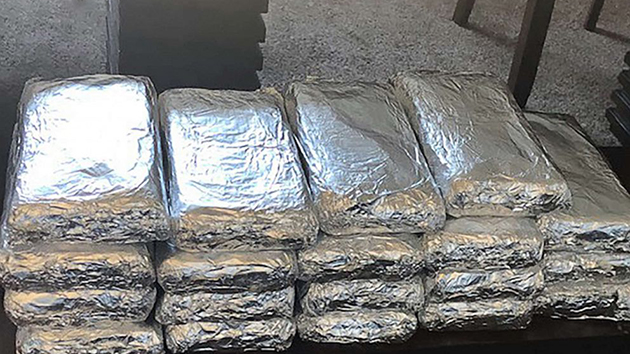 (Montgomery County Sheriff) The Montgomery County Sheriff’s Office in Dayton, Ohio, released this image with an announcement that over 40 pounds of suspected Fentanyl had been seized during the week of Oct. 21, 2019.(DAYTON, Ohio) — Over 40 pounds of fentanyl were seized in an Ohio drug bust that officials are saying amounts to “chemical warfare.”Authorities in Montgomery County announced the drug trafficking bust that took place in Dayton during the week of Oct. 21.Shamar Davis, 31, Anthony Franklin, 30, and Grady Jackson, 37, are all facing charges of possession with intent to distribute 400 or more grams of fentanyl along with a charge of felon in possession of a firearm, the Montgomery County Sheriff’s Office said in a statement.The suspects were arrested after authorities gathered evidence showing the trio were involved in narcotics trafficking, police said. The Miami Valley Bulk Smuggling Task Force, the FBI Safe Street Task Force and local authorities are investigating the case.Investigators seized over 44 pounds (20 kilograms) of suspected fentanyl, along with 1,500 grams of suspected methamphetamine and 500 grams of suspected heroin, officials said. Three firearms and $30,000 were also seized in the bust.”The quantity of fentanyl in this case amounts to chemical warfare and a weapon of mass destruction,” Ohio Attorney General Dave Yost said. “I applaud the work of our task force and our law enforcement partners – this is an enormous amount of deadly drugs that will no longer be on our streets.”Vance Callender, Homeland Security Investigations agent in charge of Michigan and Ohio, said the amount of fentanyl seized was “enough to kill the entire population of Ohio, many times over.”The state of Ohio has been one of the hardest-hit states by the nation’s growing opioid and fentanyl epidemics.”This multi-million dollar fentanyl seizure clearly shows the enormity of the opioid problem in this area,” according to Acting Special Agent in Charge Joseph M. Deters of the FBI’s Cincinnati Division. “Law enforcement will continue to work aggressively to address the illegal drug supply, but there is also a continuing need to address demand as well.”Ohio saw an increase of more than 500 fentanyl encounters — police samples testing positive for the drug — from 2014 to 2015, the latest data available from the U.S. Centers for Disease Control and Prevention. Only three other states — Pennsylvania, Massachusetts and New Hampshire — saw similar increases.In September, the Franklin County Coroner’s Office reported a surge in overdose deaths and warned residents that they could be fentanyl-related. In August, the office issued a similar alert saying six county residents had died from overdoses in less than 24 hours.That news came just weeks after the office announced that nine people had suffered fatal overdoses in a two-day period in July.Copyright © 2019, ABC Audio. All rights reserved