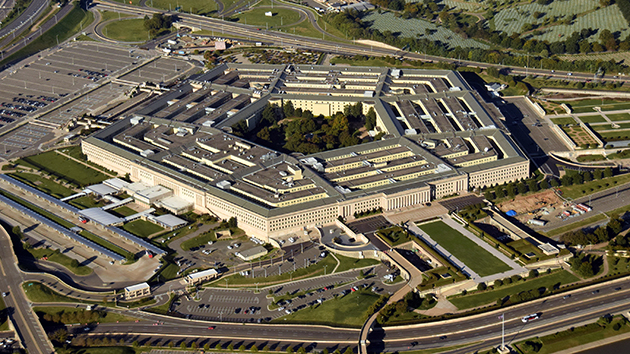 Ivan Cholakov/iStock(WASHINGTON) — The Pentagon released aerial footage on Wednesday showing the U.S. assault force approaching the compound of Abu Bakr al-Baghdadi, the founder and leader of the Islamic State, killed in a U.S. military operation over the weekend. Additional video showed the U.S. airstrike that destroyed the compound after American special operations forces left the location.In a Pentagon briefing, the commander of U.S. Central Command Gen. Kenneth McKenzie provided new details about the U.S. raid carried out on Saturday and showed new aerial imagery and video of the mission.He also warned that ISIS “will be dangerous” in the aftermath of al-Baghdadi’s death, saying, “We suspect they will try some sort of retribution attack.”Earlier on Wednesday, McKenzie joined Defense Secretary Mark Esper and Chairman of the Joint Chiefs of Staff Gen. Mark Milley as they provided classified, separate briefings on the raid to members of the House and Senate. CENTCOM later tweeted out videos and photos of the raid.Nearly 100 U.S. troops were transported by eight Chinook helicopters from a staging base inside Syria, taking fire as they arrived at al-Baghdadi’s compound in northwestern Syria near the town of Idlib, McKenzie said. The general told reporters that he suspected al-Baghdadi was hiding there because of the pressure the U.S. and its partners had placed on ISIS in eastern Syria.Between 10 and 15 militants — not affiliated with ISIS — were killed by the U.S. as they approached the compound to try and investigate what was going on. Video footage that emerged earlier this week showed a white van riddled with bullets outside the compound. McKenzie said that was a vehicle carrying some of these militants who demonstrated hostile intent.While no U.S. troops were killed in the operation, a U.S. military working dog of the Belgian Malinois breed was slightly wounded after cornering al-Baghdadi in a dead-end tunnel before he detonated his suicide vest, killing himself and two children. The unidentified dog is already back on duty and remains in the region, the Pentagon has said.McKenzie told reporters that the dog is a four-year veteran of the U.S. Special Operations Command K-9 program and has completed 50 combat missions. He was injured by live electrical wires that were exposed after al-Baghdadi detonated his suicide vest.U.S. forces remained at the compound for more than two hours during the raid and were able to positively identify al-Baghdadi’s body with a DNA test. McKenzie said the U.S. also secured “substantial” documentation and electronics found at the location — material that is now being “exploited” by the U.S. for intelligence purposes.Eleven children found at the compound were left at the scene in the custody of a responsible individual who has not been identified, a senior defense official said on Monday. ABC News has also learned that al-Baghdadi’s body was buried at sea in accordance with Islamic tradition and the law of armed conflict.Copyright © 2019, ABC Audio. All rights reserved.