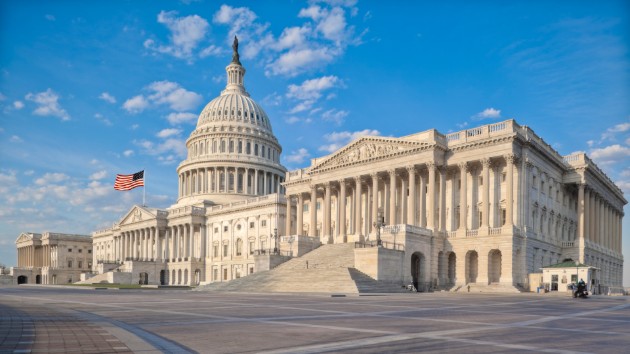 drnadig/iStock(WASHINGTON) — The growing impeachment probe of President Donald Trump will mark a rare day Wednesday when House investigators are expected to hold two closed-door depositions. Two State Department officials are scheduled for questioning, but it’s unclear exactly what lawmakers will ask them about.Catherine Croft is a Ukraine specialist who worked under Ambassador Kurt Volker, the former U.S. special envoy to Ukraine who has become a key player in the impeachment inquiry.According to a prepared statement, obtained by ABC News via counsel to Croft, the career diplomat is expected to testify about her time working for Volker and speaking to her participation in a mid-July 2019 meeting during which “an OMB representative reported that the White House Chief of Staff, Mick Mulvaney, had placed an informal hold on security assistance to Ukraine.”Croft goes on in her prepared remarks to state it was her understanding this was done at the direction of the president.Volker, who testified on Capitol Hill earlier this month, shared text messages that revealed efforts to pressure Ukrainian President Volodymyr Zelenskiy to commit to investigate former Vice President Joe Biden and his son, Hunter’s business dealings in the Ukraine, in exchange for U.S. military aid and a meeting with Trump.Before working with Volker, Croft worked on Ukraine policy at the National Security Council and served as the executive director of the McCain Institute.Christopher Anderson, formerly a special adviser to Volker, will also appear before the three congressional committees leading the impeachment probe.In his prepared remarks, also obtained by ABC News via his counsel, Anderson is expected to detail his time working for Volker and the interactions he had with members of the Trump administration from May to July of this year. Specifically, based on his prepared testimony, Anderson is expected to tell Congress that he recalled being in a meeting with then-national security adviser John Bolton in which Bolton “cautioned that Mr. Giuliani was a key voice with the President on Ukraine which could be an obstacle to increased White House engagement.”Both Croft and Anderson are represented by the same attorney, Mark MacDougal, who writes in a statement to congressional lawmakers, also obtained by ABC News, that neither of his two clients are whistleblowers.So far, House Democrats have spoken to 10 people as part of their more than one-month-long impeachment probe.Kathryn Wheelbarger, the acting assistant secretary of defense for international security affairs, who oversees security strategy and policy issues related to Europe, Russia and the Middle East, was supposed to testify as well about why military aid to Ukraine was being delayed but her testimony is being rescheduled.The House is expected to vote on a resolution on Thursday that would pave the way for public hearings on the Ukraine matter conducted by the Intelligence Committee, a new phase of the inquiry. Closed-door depositions, to this point, have also included members of the Foreign Affairs and Oversight Committees. It is unclear if the Democratic House leadership has the votes to pass the impeachment process resolution. Copyright © 2019, ABC Audio. All rights reserved.