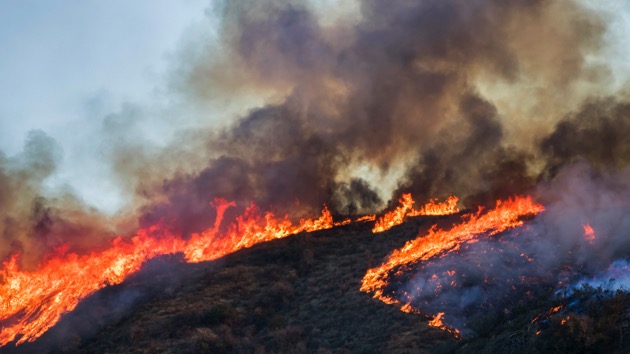 Erin Donalson/iStock(LOS ANGELES) — Two new wildfires ignited in Southern California on Thursday as the region battled ferocious winds, which only helped fuel the flames.With wind gusts reaching 60 or 70 mph, the winds can easily shoot embers and sparks into the air and send them one or two miles away.In San Bernardino County, multiple homes were engulfed in flames early Thursday from the fast-moving Hillside Fire, which erupted as ferocious 70 mph wind gusts lifted burning embers into the air.The wind-driven blaze was reported around 1:40 a.m. Thursday, San Bernardino County Fire Chief Don Trapp said. Within hours, the blaze covered 200 acres and consumed six homes.Mandatory evacuations were in effect for about 1,300 residents.

Don Silver said a neighbor alerted him to the danger by banging on his door in the middle of the night. That’s when he saw “flames like 40 to 50 feet high.””It’s scary,” Silver told ABC News. “You just want to get out, run. You don’t pick up nothing.”The fire has the potential to move so quickly that “if folks don’t evacuate when we ask them to, it’ll be very difficult to try to get them out when the fire is moving toward their homes,” Kathleen Opliger, San Bernardino County Fire’s Interim Deputy Chief of Operations, said Thursday.She said it’s “absolutely imperative that folks go when we ask them to go.”The Hillside Fire was 50% contained Thursday afternoon. One firefighter was injured.The 46 Fire — the result of a police chase and crash — erupted in nearby Riverside County shortly after midnight on Thursday, destroying at least five structures.The winds sent embers flying, falling dangerously close to horses below. It’s spread to 300 acres and is 5% contained.The 46 Fire comes one day after the Hill Fire started in Riverside County, forcing the elderly to evacuate a healthcare center. The Hill Fire has since reached 80% containment.”I had four hours of sleep from the fire I was on yesterday. And that’s probably four more hours than some of these guys have had,” he told ABC News Thursday. “Hate to say that we’re used to it… we’re just gonna power through.”In Simi Valley, where wind gusts peaked at 70 mph, winds propelled the roaring Easy Fire to 1,700 acres. Firefighters Wednesday worked to defend the Ronald Reagan Presidential Library against the flames.Roughly 7,000 homes were evacuated after the fire started on Wednesday. The blaze is 10% contained.Winds are weakening in Southern California Thursday afternoon and should be calmer on Friday, helping crews fight the flames.Meanwhile, the monster Kincade Fire in Northern California’s Sonoma County has covered 76,800 acres.The blaze has been burning since Oct. 23, but has now climbed to 60% containment as the winds weaken.The Kincade Fire burned 141 homes and is still threatening over 90,000 structures.Four firefighters have been injured.Over 5,000 people remained under evacuation orders as of Wednesday night.Copyright © 2019, ABC Audio. All rights reserved.