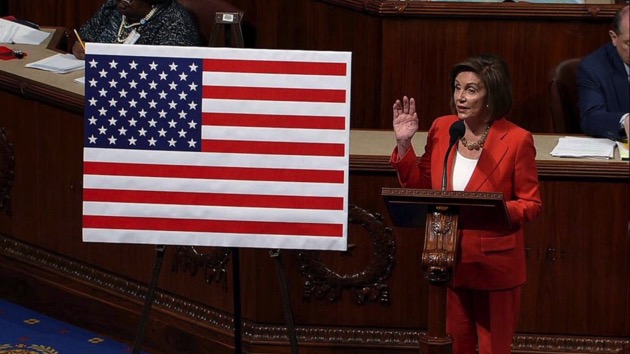 ABC News(WASHINGTON) — Just before the House voted to pass the impeachment probe resolution on Thursday, Speaker Nancy Pelosi told reporters, “It’s a sad day. It’s a sad day because nobody comes to Congress to impeach a president of the United States, no one.””Today, we move forward down the path forward by putting forward our procedures, which are transparent and open,” she told reporters at her weekly news conference.“These rules are fairer than anything that have gone before in terms of a, of an impeachment proceeding,” Pelosi said when ABC News Senior Congressional Correspondent Mary Bruce asked whether the new rules were really fair to Republicans.

"These rules are fairer than anything that have gone before in terms of an impeachment proceeding," Speaker Nancy Pelosi tells ABC News' @maryKbruce when asked about Republican criticism that the impeachment inquiry rules are unfair https://t.co/PiezMn2OeF pic.twitter.com/dtgFCUFncd

Defending the Democrat-led impeachment inquiry overall, Pelosi said, “We take an oath to protect the Constitution. And we cannot ignore – we will not ignore when the president’s behavior indicates that that investigation, that that inquiry is necessary. As the inquiry proceeds, we’ll decide whether we go forward with impeachment. That decision has not been made,” she said.”We will proceed with the facts – the truth – it’s about the truth and the Constitution,” she said. “And we’re working hard to defend our democracy, because if we don’t have a system of checks and balances we might as well all just elect a president and go home because it will be that unitary form of government that our Founders did not want us to have.””This isn’t about politics, it isn’t about patriotism – uh, partisanship – it’s about patriotism,” she continued. “And I would hope that rather than protecting the president personally, all of our colleagues would choose to honor their oaths of office.”Copyright © 2019, ABC Audio. All rights reserved.