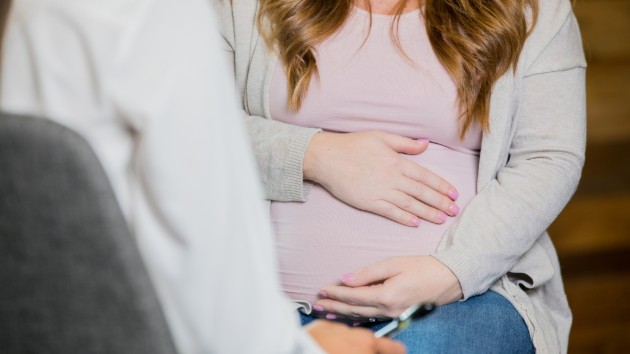 Courtney Hale/iStock(NEW YORK) — Meg Vanordstrand’s first pregnancy was “blissful,” she told ABC News’ Good Morning America.”I did have postpartum depression though,” she said of her post-birth experience. “So that’s what I was prepared for the second time around.”But her second pregnancy was vastly different.”They were so different that I though I must be having a boy,” Vanordstrand said, though both of her children are girls.It turns out it wasn’t the baby’s gender that made the second time around so different than the first. It was prenatal depression.”Every basic human task was overwhelming,” Vanordstrand said. “Getting out of bed, getting dressed, preschool drop off. Everything felt like climbing Mount Everest. I never felt good.”The Bloomington, Minnesota, mom of two was “short and snappy for no reason. I realized it wasn’t fair to me or my family.”Vanordstrand told GMA she sought advice from her obstetrician, but was met with disbelief.”The doctor basically said it was impossible,” she said. “It was like, ‘That doesn’t happen to pregnant women."”So like many moms do, she started searching for answers online. But they weren’t easily found. While postpartum depression is a well-covered topic, depression during pregnancy is far less so.As a result, Vanordstrand said, there was “a lot of shame” around her experience.

“There’s this attitude that you should just be grateful you’re pregnant,” she said.It turns out that despite the lack of knowledge surrounding prenatal, sometimes called prepartum, depression, it’s not so uncommon.Dr. Andrea Sacks, a reproductive psychiatrist and host of the Motherhood Sessions podcast said, “Studies show that up to 20% of women may experience depression or anxiety during pregnancy. I often work with patients around this issue.”One possible commonality among women who have prenatal depression is having struggled with depression prior to pregnancy. This was the case for Vanordstrand, who had taken anti-depressants in the past.”When women who have a history of depression stop their antidepressants before pregnancy, they may be at an increased risk for a relapse during pregnancy,” Sack said. “As a reproductive psychiatrist, I work with patients to discuss the risks and benefits of starting or continuing their antidepressants during pregnancy.”Vanordstrand sought out the advice of the midwife she had been working with when her doctor didn’t have the answers she needed.”I wanted everything to be as natural as possible, but she told me, ‘It’s OK to do what you need to do to survive,"” she said.So once she had exhausted the natural route of sleeping more, eating better, talk therapy, acupuncture and exercise, Vanordstrand realized it was time to go back on her medication. She saw another obstetrician and got the prescription she needed.But still, she said, “I hemmed and hawed.” Finally, she realized for her sake — and the sake of her family — taking the anti-depressant was the right choice for her. Within two weeks, she told GMA, she felt better.”It was like a veil had been lifted,” she said.Sacks said there are resources for women with similar experiences.”If you have a history of depression and are not sure what to do about your treatment during pregnancy, or are pregnant and not sure what sort of support you might benefit from, talk to your doctor, practitioner, or call the Postpartum Support International help hotline 1-800-944-4773,” she said.As for Vanordstrand, she and her family, including her husband and two young girls, Liv and Nora, are doing well. If she could talk to her former self, she told GMA she would have gotten help sooner.”There’s a way to feel better,” she said. “I’m sure some women white-knuckle it, but I felt horrible, there was no end to it. Accept this is happening, and be gentle with yourself.” Copyright © 2019, ABC Audio. All rights reserved.