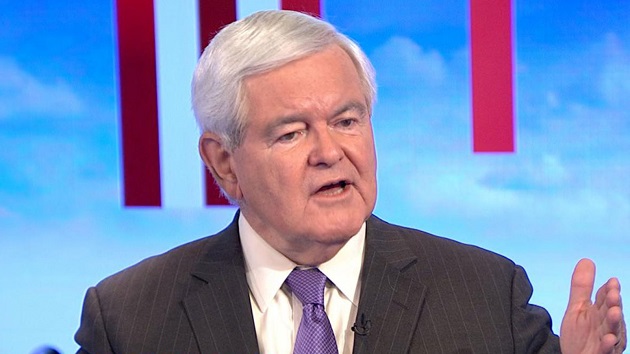 ABC News(WASHINGTON) — Former House Speaker Newt Gingrich, joined ABC’s “Powerhouse Politics” podcast on Wednesday, calling the next phase of the House’s impeachment push against President Donald Trump, “rigged.””It’s a vote for a resolution that is totally phony,” Gingrich said of the House measure expected to come for a vote on Thursday. “It gives the Republicans no real authority. It gives the president no real authority.” Gingrich — who led the last impeachment inquiry of a president, targeting President Bill Clinton in 1998 — told ABC News’ Chief White House Correspondent Jonathan Karl and Political Director Rick Klein that this impeachment inquiry is much different than the one he oversaw two decades ago.”When we impeached Clinton, we had 11 counts of guilty in the independent counsel report,” said Gingrich. “When Mueller reported after two solid years, he had zero counts of guilty.”He continued, “If they hadn’t found this whistleblower, they’d have found somebody else … and if it wasn’t Ukraine, it would be something else.””But it is Ukraine,” Klein responded.On Monday, Speaker of the House Nancy Pelosi announced that the House will vote on a process that will make the impeachment inquiry proceedings more transparent. If passed, the resolution will determine procedures for upcoming hearings and give full disclosure of deposition transcripts, essentially making the inquiry open to the public.House Democrats also claim the resolution would establish the due process for Trump, appeasing what Republicans believe their counterparts have blatantly denied the president thus far.When Klein asked if the public hearings would legitimize House Democrats’ efforts, Gingrich said it still wasn’t a fair process, as the Democrats will have had “months creating a record that’s secret, that allows them to shape the hearings.”Pelosi announced a formal impeachment inquiry of Trump on Sept. 24, with all relevant committee proceedings since then happening behind closed doors.Also on the podcast, Karl asked Gingrich about recent comments he made on CBS saying, “If I had the ability to do it, there wouldn’t be a White House press corps in the White House.””Why are you suggesting that the president should be sheltered from the White House press corps?” asked Karl, the president of the White House Correspondents Association. “Are you afraid that Donald Trump can’t handle it?Gingrich said, “No. I don’t think the president has an automatic obligation to try to communicate to the American people through a group of people who are relentlessly hostile to him.”Karl reminded the former Georgia representative of the important role the press has in the United States’ democracy.”What I am asking you about is a fundamental bedrock principle, which is, we have a free press in this country,” Karl said. “It is able to question and hold accountable those in power. And those in power do not pick and choose who get to have access to the highest level of the government based on whether or not they like what they write or report.”Gingrich disagreed, calling what Karl described a “modern fantasy of the press corps.”The former lawmaker was invited on the podcast to discuss the latest headlines and his book, Trump Vs. China: Facing America’s Greatest Threat. He called the book a serious look into “what may be the most important topic about our national survival.”He also told the hosts, Klein and Karl, that he disapproves of the questions they asked him, citing them as a reason for his disapproval of the press.”If you want to understand why I think the Washington press corps is incestuous, this is the first [interview while promoting the book] in which the whole interview has been about a bunch of political garbage,” Gingrich said.He added, “I’m going to hang up on you now because I am truly, deeply disappointed in the whole way you’ve handled [the interview].”He then hung up. Copyright © 2019, ABC Audio. All rights reserved.