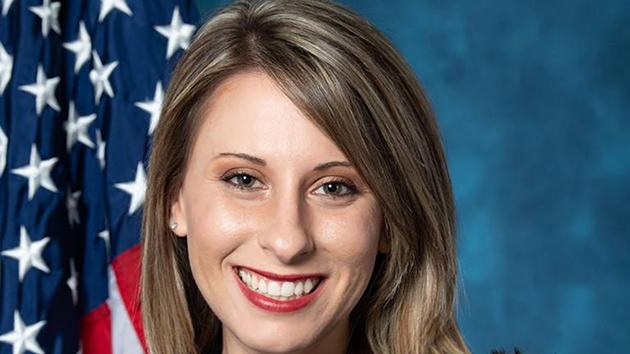 US House of Representatives(WASHINGTON) — Within hours of casting her vote to help pass an impeachment inquiry resolution, Rep. Katie Hill, a California Democrat under an Ethics Committee investigation for allegedly having a sexual relationship with one of her congressional staffers, came to the House floor Thursday to give a final, and highly personal, speech.“I wasn’t ready for my time here to come to an end so soon. It’s a reality I’m still grappling with,” said Hill, a freshman, whose last day on Capitol Hill will be Friday. “I am leaving because there’s only one investigation that deserves the attention of this country, and that’s the one that we voted on today.”Saying she has received “thousands of vile, threatening emails, calls and texts” since intimate photos of her were published on the internet, Hill, who has suggested she is the victim of “revenge porn,” said she feared for her life as well as the lives of the people she cared about.Hill is entangled in a bitter divorce, and blames her husband, who she claims is “abusive,” along with Republican operatives and the right-wing media for releasing the intimate photos of her.”I am leaving now because of a double standard. I’m leaving because of a misogynistic culture that gleefully consumed my naked pictures, capitalized on my sexuality and enabled my abusive ex to continue that abuse,” she said.On Sunday, Hill announced her resignation from Congress amid multiple scandals. On Oct. 23, an investigation was launched by the House Ethics Committee into an alleged sexual relationship she had with one of her congressional staffers in violation of House rules – an allegation she denies. In a statement, Hill did acknowledge and apologize for having a sexual relationship with a campaign staffer while she was running for Congress in 2018.Hill’s election was historic, as she was one of the first openly bisexual members of Congress. A leader among freshman Democrats, she was vice chair of the House Oversight Committee and a freshman representative to the House Democratic leadership.House Speaker Nancy Pelosi spoke to reporters about her California colleague before Hill took to the House floor.“Katie Hill’s decision to resign is her decision to resign,” Pelosi said, only four days after Hill released a statement that said Hill’s continued services were ‘”untenable.” “She’s an absolutely outstanding young public servant.”Pelosi then went on to suggest that this incident might be a learning opportunity for everyone.“It’s shameful that she’s been exposed to public humiliation by way of cyber exploitation,” Pelosi said. “And I caution everyone that they too may be subjected to that.”Hill has represented California’s 25th Congressional District for only about nine months, and within days of announcing she would step down, the fight over her seat heated up.

On Monday, Assemblywoman Christy Smith of California, a Democrat, announced she would run for Hill’s congressional seat. A day later, George Papadopoulos, a former Trump campaign adviser and a Republican, filed with the Federal Election Commission for Hill’s vacated congressional seat. Last year, Papadopoulos spent 14 days in prison for making false statements to the FBI.Speaking from the well of the House, Hill said she didn’t want to distract from the work of fellow House Democrats, telling her supporters that what happened to her, shouldn’t hold any of them back.“The way to overcome this setback is for women to keep showing up, to keep running for office, to keep stepping up as leaders, because the more we show up, the less power they have,” Hill said.“Today, as my final act, I voted to move forward with the impeachment of Donald Trump on behalf of the women of the United States of America. We will not stand down. We will not be broken. We will not be silenced. We will rise, and we will make tomorrow better than today,” she said.”Thank you,” she concluded, “and I yield the balance of my time for now, but not forever.”Copyright © 2019, ABC Audio. All rights reserved.