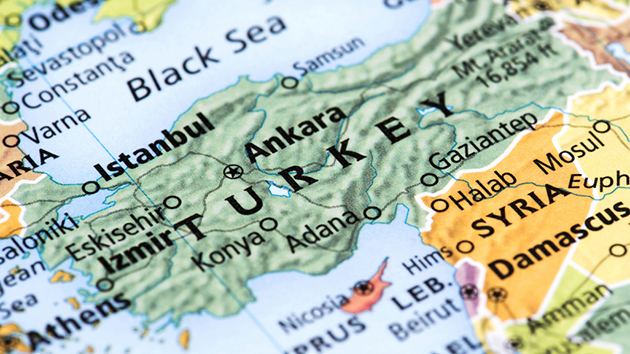 mersukrugoksu/iStock(NEW YORK) — The leader of the Syrian Kurds’ civilian government accused Turkey and its forces of continuing its offensive into northern Syria using armed drones and heavy artillery, and conducting ethnic cleansing against the Syrian Kurds, despite ceasefire agreements.The charge flies in the face of the Trump administration’s characterization that its ceasefire with Turkish President Recep Tayyip Erdogan has halted his operation and allowed U.S. and Syrian Kurdish forces to again focus on fighting the remnants of the Islamic State.”If the U.S. is really serious about sustaining the operation against terrorism, they should stop the Turkish incursion,” said Ilham Ehmed, president of the Syrian Democratic Council, the political wing of the Syrian Democratic Forces, which controls the territory in northeast Syria that they won back from ISIS with the U.S. and a global coalition.While President Donald Trump has, for now, reversed his withdrawal and will now keep up to 900 troops in Syria, Ehmed said the administration’s plans are unclear.”The American map on Syria is not clear yet. We’ve just heard from our meetings here that they have the will to stay, but until when, why and for what, we have no clear answer yet,” she said Thursday through a translator.After fighting together, the SDF and SDC have accused the Trump administration of abandoning them when Trump moved U.S. forces back from the Turkish-Syrian border, effectively allowing Turkey to launch its offensive against the Syrian Kurds, which Ankara considers a terrorist organization because of its ties to Kurdish separatists in Turkey.A U.S.-Turkish ceasefire halted that operation in return for the SDF departing the areas Turkey controlled. U.S. officials said that will allow the fight against ISIS to resume, as U.S. forces remain behind to conduct joint operations against the terror group and protect oil fields from being exploited by it for revenue.A senior State Department official told ABC News on Wednesday that there were “conflicting claims of who’s where, whether people are still in the zone,” but could not offer an update. But Treasury Secretary Steven Mnuchin said Wednesday that he was “pleased” with how the ceasefire has held.Ehmed said that was not true, however, describing daily attacks by armed drones and heavy shelling by Turkish forces and their allied Syrian opposition forces.”No, it did not stop at all. There was a media announcement. … But practically speaking, the military attacks have been carried out a daily basis, they did not stop at all,” she said.Turkey has accused Syrian Kurdish forces of not exiting the full buffer zone that Erdogan negotiated with Russian President Vladimir Putin, days after reaching the deal with Vice President Mike Pence. Turkey and Russia began joint patrols on Wednesday to inspect the area and ensure its cleared of Syrian Kurdish forces.Instead of those joint patrols, Ehmed called for a no-fly zone and an international force to monitor security in the Turkish-Syrian border area.”We call on the Pentagon to not allow Turkey to use the Syrian airspace, and we hold the Pentagon responsible for all the crimes committed by Turkey if they block the airspace,” Ehmed said.Ehmed and others testified last week before the House that Turkey and its opposition forces committed war crimes, including the use of white phosphorus as a weapon, attacks on civilians and civilian infrastructure, and executing captured SDF fighters.U.S. special envoy for Syria James Jeffrey said Wednesday that the U.S. had noted “several incidents which we consider war crimes” and was investigating how the white phosphorus was deployed. Ehmed said the SDC had provided evidence and documentation to the U.S., but there were still American diplomatic and military personnel in the area who are “seeing the massacres in their naked eyes.”Since the Turkish operation began, Ehmed said that over 400,000 people were displaced, including 18,000 children; 412 SDF fighters had been killed and 419 injured; and 509 civilians had been killed and 2,733 injured. ABC News could not independently verify those statistics.Despite the anger and feelings of abandonment among Syrian Kurds, Ehmed said the SDF remains open to working with the U.S., but both sides need to rebuild “mutual trust. … We still hope that they are going to keep their promises and re-evaluate all the bad decisions that they’re taking.”Copyright © 2019, ABC Audio. All rights reserved.