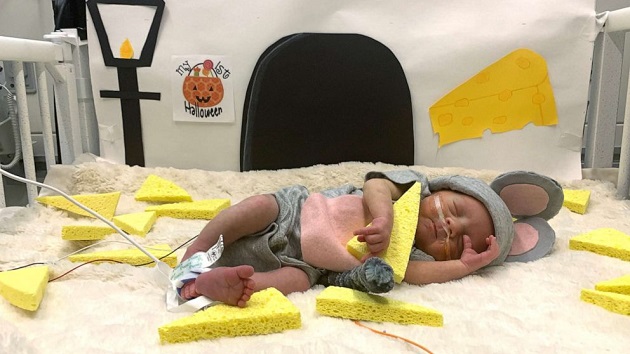 Advocate Children’s Hospital(CHICAGO) — The preemie babies at Advocate Children’s Hospital outside of Chicago are preparing to face their first Halloween in a world of needles and sleepless nights.But the neonatal intensive care unit’s staff is working hard to make sure that these little ones and their families still get to take part in celebrating the holiday. The hospital is throwing a Halloween costume contest in their NICU so that all the tiny patients can dress up in their Halloween best.”Advocate Children’s Hospital just wanted to do something special, so their parents could still commemorate their little one’s first Halloween and create some special memories,” Julie Nakis, public affairs manager for Advocate Aurora Health, told ABC News’ Good Morning America.This year, parents got to work crafting creative costumes for their kids and their cribs. Now, the NICU has everything from a “baby” corn husk to Snow White to a mouse and even a grandmother.Other adorable honorable mentions include two babies dressed as peas in a pod and a baby donning a football uniform in a picture that’s scoring on social media.People can vote for the winner online on the hospital’s Facebook page by “liking” the picture of the baby they think is the best dressed.The tot with the most likes will win a prize pack, including blankets, onesies and other goodies for both parents and baby, followed by two runners-up who will also receive prizes.So far, the baby “grandma” is taking the lead out of the 32 tiny contestants with 4,500 likes.This is the fifth year the hospital has hosted the contest, and it hopes to keep the tradition alive for years to come so that Halloween can provide a welcome distraction for the families.”We hold this special event to bring a bit of normalcy to the parents during an otherwise stressful time,” Nakis said.