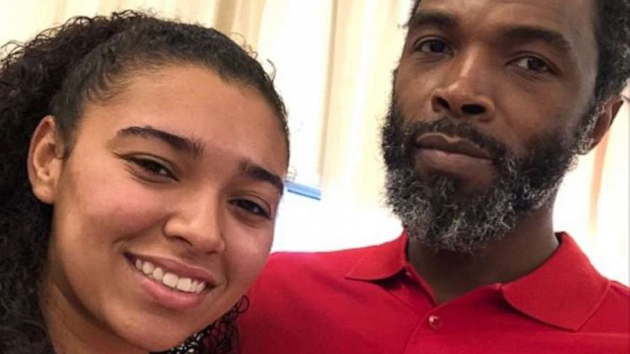 (Elijah Blanchard) Aniah Blanchard is pictured with her father, Elijah Blanchard, in this undated photo.(MONTGOMERY, Ala.) — UFC President Dana White is upping the reward being offered for information regarding the disappearance of Aniah Haley Blanchard, the stepdaughter of mixed martial arts competitor Walt Harris.Blanchard, 19, has not been seen since the Alabama college student was caught on surveillance video visiting a convenience store last week. Earlier Wednesday, Alabama Gov. Kay Ivey issued a proclamation authorizing a $5,000 reward for information leading to an arrest and conviction of a suspect in the case. White’s offering came in the form of a Twitter video released Wednesday evening.Blanchard’s vehicle was found abandoned near an apartment complex in Montgomery last Friday. The vehicle, a black 2017 Honda CRV, had damage to the front left tire area, which is believed to have occurred between the time she was last seen and when the vehicle was found, according to the Auburn Police Division.Blanchard, a student at Southern Union State Community College in Wadley, was reported missing by her family on Oct. 24. Police said she last communicated with a friend on Oct. 23, just before midnight. The Lee County District Attorney’s Office said it is approaching the search for Blanchard as if foul play was involved.”This is a criminal investigation. Obviously, we’re approaching it as such. I think the only right way to do it is to approach it as if foul play is involved and as if there is someone or more than one person involved in this,” Lee County District Attorney Brandon Hughes said Wednesday. “We do not believe Aniah would or did essentially go missing on her own volition.””I encourage anyone with information about the whereabouts of 19-year-old Aniah Blanchard, who was last seen Oct. 23, to please call *HP or 9-1-1,” Ivey said in a tweet Wednesday. “We continue to pray for Aniah & her family as law enforcement officials work to bring her home.”Police released a surveillance video earlier this week, showing Blanchard making a purchase at a convenience store in downtown Auburn on Oct. 23.It also announced the FBI, U.S. Marshals Service and the Department of Homeland Security were among several agencies investigating her disappearance.Blanchard’s father, Elijah Blanchard, said his daughter “would not leave” without telling anyone.”She always calls me at the end of the day to see how my day was,” Elijah Blanchard told ABC News in an exclusive interview Monday evening. “She would never not contact somebody and let them know what she’s doing.”He described his daughter as “very ambitious,” “very organized” and “fun to be around.””If someone would see Aniah out, they would know something was wrong if she didn’t carry that beautiful smile that she always has,” he said.Harris, a UFC heavyweight fighter, shared images of his stepdaughter on his Instagram page last week, asking members of the public to come forward with information.”Please help find my baby Aniah Blanchard. She is missing [in] Auburn,” Harris, one of the top mixed martial arts contenders in the heavyweight division, told his nearly 30,000 followers. “Please help!!!! Any info message me on here or call the Auburn police … PLEASE SHARE THIS!!!!”Blanchard is described as a light-complexioned black female with brown eyes and brown hair who is 5 feet 6 inches tall and about 125 pounds. She was last seen wearing a black dress and tan duck boots with black stockings, according to police. Copyright © 2019, ABC Audio. All rights reserved.