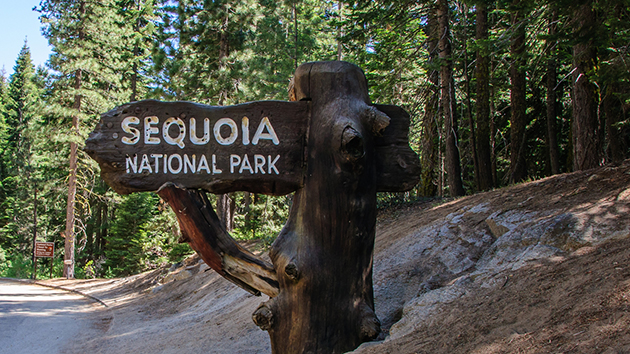 Ershov_Maks/iStock(VISALIA, California) — A woman who vanished in a vast forest over the weekend was rescued three days later after spelling out “SOS” with rocks, officials said.Mary Joanna Gomez, 56, was found “alive and in stable condition” in California’s Sequoia National Park on Monday afternoon, according to a press release from the National Park Service.”I am a little cut and bruised and regaining my strength, but I’m very fortunate to be in as good a condition as I am,” Gomez said in a statement. “I am profoundly thankful to the National Park Service who worked tirelessly to rescue me and were so very kind when they did… My priority now is spending time with my family.”Gomez, a a traveling nurse from Jackson, Mississippi, was on assignment in the San Francisco Bay Area, and had gone to Kings Canyon National Park last Wednesday. She texted her daughter the following day with photos of the scenery, saying she intended to visit Sequoia National Park as well. That was the last communication she had with her family before she disappeared, according to the National Park Service.Gomez was expected to return to work on Friday but never showed up. Her family reported her missing to the San Francisco Police Department that same day.Multiple teams on foot with search dogs and an aircraft began looking for Gomez, with National Park Service officials on Saturday morning placing her in the Giant Forest of Sequoia National Park, which covers an area of 1,880 acres. Late that night, a park ranger located Gomez’s car along the Generals Highway near a trailhead. The vehicle had not been at that trailhead earlier in the day, according to the National Park Service.On Monday, a California Air National Guard aircraft spotted rocks on the ground that formed the letters “SOS” and later identified a person nearby. Search teams on foot were then able to find Gomez about 3.5 miles from her vehicle over rocky and steep terrain. Gomez was “cold, thirsty and hungry, but in otherwise good health,” according to the National Park Service.”It had been a whirlwind of emotions from the time I first called Dad, asking if he had heard from Mom, all the way to the moment they said, ‘She’s alive. They’ve found her,"” her daughter, Emily Gomez, said in a statement obtained by ABC News. “I truly cannot express my gratitude to the National Park Service, California Highway Patrol, Air Force, and everyone else who played a part in her rescue. I thank everyone for reaching out and their prayers and support. I thank everyone who has never met my mom, yet shared her news anyway in hopes of finding her faster. The outcome was definitely what we prayed for. I have my entire family safe and sound. I have everything I could ask for.”Copyright © 2019, ABC Audio. All rights reserved.