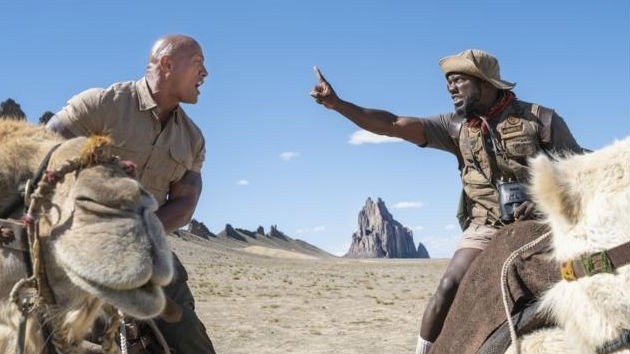 © 2019 CTMG, Inc. All Rights Reserved.(LOS ANGELES) — The first trailer for the follow-up to the hit Jumanji reboot hinted at the The Next Level’s newest conceit: that Dannys DeVito and Donald Glover have been sucked into the real-life video game from the original, and their avatars are Dwayne Johnson and Kevin Hart.

But the final trailer shows the game has gone to new locations, and reveals that while the grandfather of Alex Wolf’s Spencer is taking Spencer’s usual place inside The Rock, Spencer himself is missing. For her part, Madeline Iseman’s Bethany is also not her normal alter-ego, either. Instead instead of being represented by Jack Black, she’s become a horse — ridden by returning character Alex, played by Nick Jonas.

Instead, Ser’Darius Blain’s Fridge — whose video game alter-ego had been played by Kevin Hart — has been plopped into Bethany’s former avatar, while Danny Glover takes Fridge’s place as Hart.

“I got the fat white dude?!” Black-as-Fridge yells, lamenting the video game character’s listed weaknesses when the players find themselves in the desert: “‘Heat, sun and sand.’ How is this guy a character in an adventure game?”

The “next level” becomes a quest to find their missing friend — over snow-capped mountains, through jungles, and not-quite-across dangerous cliffs in a dune buggy.

Jumanji: The Next Level opens December 13.