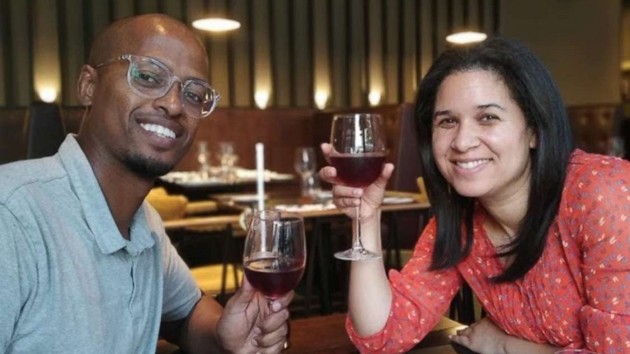 Courtesy Amon Browning(NEW YORK) — Is it possible to retire in your 40s or even earlier? One couple from San Francisco, California is saying yes, and sharing their tips.In July of this year, Amon Browning, 39 and his wife, Christina, 41, parents of two daughters, announced in a YouTube video that they “are financially independent and have retired early” by saving more than $2 million in just eight years.Amon thought about the idea of an early retirement after 10 years of working at an office job for the federal government. “I went home and had a conversation with Christina and I said I just can’t see myself doing this for the next 30 to 40 years,” Amon told ABC News’ Good Morning America. “There’s more to life that I wanted to do than just sitting in my cubicle.”While it may seem scary for some people in relationships to hear their spouse cast doubts about their career so early in life, Christina helped Amon get out of his funk by hearing him out and working with him to see what their next steps would be career-wise in life. “He said I don’t want to do this for the rest of my life. He also said I want to retire in ten years,” she said. “When he first told me I was sort of taken aback, but then we started devising this plan and really figuring out how we can retire early.” Part of that plan was joining the “FIRE movement” which stands for Financial Independence, Retire Early. How it works is by maximizing savings and generating passive income — so your money works for you instead of the other way around.For many people who follow the FIRE movement, it comes down to what you can save, and Amon and Christina were able to work as a team to reach their financial goals together. “One of the best things about our relationship is that we’re always encouraging each other and trying to find ways to say yes,” Christina said. “So when he told me that, I was like, OK I’ve never heard of this and it’s so bizarre, but maybe we can do this.”For the Brownings, they made some adjustments in their lives by investing 70 percent of their income, flipping fixer-uppers and trading in their expensive BMW for a used minivan. They even started driving for Uber and Lyft to earn a little extra. “Before we discovered financial independence, we just weren’t intentional about the actions we took with our money. We didn’t have a budget, we didn’t have a wealth building plan, we were just kind of going through life and I would say that we discovered FIRE, it was such an eye opening event,” Amon said. “It was something that we said if we develop a plan and stick to it and are more intentional with how we spend our money, we can achieve financial independence.” Now, Amon and Christina are living their retirement dream in Portugal with their two daughters and spending their days eating breakfast together as a family, traveling and learning Portuguese — and above all, living off the income from their investments.In their spare time, they inspire other families by sharing their secrets and chronicling their journey to financial success on their YouTube channel, “Our Rich Journey,” and on social media, hoping to inspire others to join them in early retirement.“I just want people to know that achieving financial independence is something that anyone can do. It is scalable,” said Amon. “It’s not just for the people that are uber rich; anyone that has a plan in place can do this.” Want to give the FIRE method a try? Check out nine of Amon and Christina’s tips below: 1. Adopt a “can-do” mindset and avoid limiting beliefs. 2. Create a budget that pays yourself first, like automating your savings. 3. Calculate your FIRE number, which is the total amount of money you need invested in assets like stocks, bonds and CDs for example, so that the income from your assets will sustain you throughout your entire lifetime without you having to work again. To calculate your FIRE number, first determine your total estimated/projected annual expenses during retirement. You’ll generate your FIRE number by multiplying your projected annual expenses by 25. 4. Create an incremental FIRE plan (with mini-stages) and track your progress. To see how you can create a plan, check out the YouTube video below:

5. Save more by cutting expenses and embracing the idea that you don’t need to keep up with the Joneses. 6. Make more by doing side hustles. 7. Become financially literate so that you feel comfortable investing in the stock market and/or real estate (whatever you feel passionate about). 8. Invest the money you saved from cutting expenses and made from side hustles. 9. Surround yourself with people who will support you on your FIRE journey. Copyright © 2019, ABC Audio. All rights reserved.