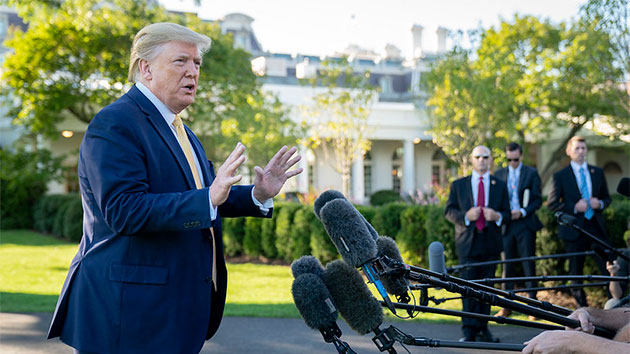 Official White House Photo by Shealah Craighead(WASHINGTON) — A new name in the House impeachment inquiry, former Republican Rep. Bob Livingston, has surfaced in the ongoing investigation by federal prosecutors in New York into efforts by President Donald Trump’s personal lawyer Rudy Giuliani and his associates in connection with Ukraine, multiple sources have told ABC News. More specifically, the sources said, prosecutors in the Southern District of New York are looking into whether the former congressman had contact with Giuliani related to the push for the removal of then-U.S. Ambassador to Ukraine Marie Yavonovitch.Livingston, who played a key role during the impeachment proceedings of former President Bill Clinton during the 1990s, has emerged in the House impeachment inquiry after his name was floated during testimony from a former White House official earlier this week.On Wednesday, former National Security Council Director for Ukraine Catherine Croft, during her deposition before House impeachment investigators, said that she “received multiple calls” from Livingston while she was at the White House, telling her that then-Ukraine ambassador Marie Yovanovitch be fired, according to her opening statement obtained by ABC News.Livingston was slated to succeed former House Speaker Newt Gingrich in 1998, but instead he resigned during the House impeachment debate over whether Clinton lied under oath or obstructed justice in connection with an affair — amid revelations of Livingston’s own past extramarital affairs.Asked by ABC News whether there was any connection between his alleged push to oust Yovanovitch and that of Giuliani’s, Livingston said, “The simple answer is that no, there was no connection between our clients nor of our efforts and those of Mr. Giuliani.” Livingston declined to comment specifically about whether he pushed for Yovanovitch’s removal or whether he had been contacted by investigators or prosecutors, Livingston declined to comment.The U.S. Attorney’s Office for the Southern District of New York declined to comment on the matter. However sources familiar with the investigation say Livingston is not a target of the probe.Two of Giuliani’s associates, Lev Parnas and Igor Fruman, have now been indicted in a campaign finance case out of the Southern District of New York. Both men have pleaded not guilty. According to the indictment, Parnas sought Yovanovitch’s ouster earlier this year along with their efforts to get Ukrainian officials to investigate the president’ political rival former Vice President Joe Biden and his son.As ABC News has previously reported, Manhattan investigators are looking into the business relationship between Giuliani and his Soviet-born associates, focusing on whether Giuliani had to register as a foreign agent with the Justice Department for his work for his foreign clients, according to sources.Also under scrutiny by prosecutors in the Southern District of New York in connection with efforts to oust the former ambassador to Ukraine is former Rep. Pete Sessions, R-Texas, who as previously reported by ABC News, allegedly met with Parnas as they sought his assistance in removing Yovanovitch.Sessions previously told ABC News he was subpoenaed in connection with the alleged illegal straw donations described in the indictment against the two Giuliani associates, and said that he is fully cooperating with the investigation. Sessions has said he has not been told that he is a focus of the investigation and he has denied any impropriety.Livingston’s emergence as a player in Ukraine lobbying doesn’t come as a complete surprise.Now a powerhouse Washington lobbyist, the former Louisiana congressman, through his lobbying firm Livingston Group, has been actively lobbying on behalf of at least a couple of Ukrainian clients since last year, records filed under the Foreign Agent Registration Act show.Among Livingston’s biggest Ukraine client in recent years is an obscure LLC named Innovative Technology & Business Consulting, which was revealed in FARA filings as an effort organized by supporters of Ukraine’s former Prime Minister Yulia Tymoshenko during her presidential campaignin the latter half of 2018 and early 2019.Tymoshenko was a political rival of former Ukraine President Viktor Yanukovych, the predecessor of current Ukrainian President Volodymyr Zelenskiy’s predecessor and a former client of Trump campaign manager Paul Manafort.FARA records show that former Rep. Bob McEwen, a registered agent for the Livingston Group, arranged meetings between Tymoshenko and Giuliani during her trip to Washington, D.C., in December 2018. That week, she also met with other U.S. lawmakers and political figures, including House Intelligence Committee chairman Adam Schiff, D-Calif., now leading the impeachment inquiry, and Sen. Tom Cotton,R-Ark.After Tymoshenko lost to Zelenskiy in the presidential election earlier this year, Livingston Group — through efforts led by McEwen — pushed for Tymoshenko to become Zelenskiy’s prime minister.It’s unclear what connection, if any, exists between Livingston’s lobbing on behalf of his Ukrainian clients and his push to oust the ambassador.Prior to representing Tymoshenko, Livingston also shepherded a Washington visit of Ukraine’s Deputy Minister of Economic Development Natalia Mykolska in May 2018 on behalf of a trade group named the Association of Enterprises UKRMETALURGPROM.In early 2018, Tymoshenko was also represented by former Trump campaign official Corey Lewandowski’s former firm Avenue Strategies.Copyright © 2019, ABC Audio. All rights reserved.