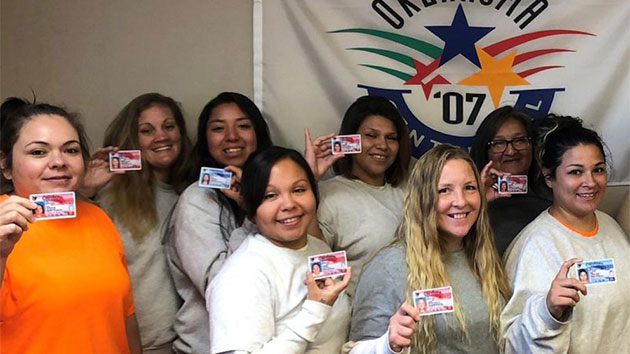 @OklaDOC/Twitter(OKLAHOMA CITY) — Hundreds of prisoners in Oklahoma are scheduled to be released Monday after the Oklahoma Pardon and Parole board on Friday commuted the sentences of more than 450 inmates.House Bill 1269, which just took effect after it was passed in May by the state legislature, was designed to limit prison time for low-level drug and property crime offenders. The people of Oklahoma kicked off this process after passing a ballot initiative to change the punishment for non-violent minor drug offenses three years ago.”These are real people with real lives and real families and real friends, and now they get to go home,” Oklahoma House Majority Leader Jon Echols said a press conference Friday. “And that’s a pretty special accomplishment.”Calling Friday’s commutation the single largest in U.S. history, Oklahoma Gov. Kevin Stitt said at a press conference that it’s “an important step for criminal justice reform in our state.””Today,” he added, “we are implementing the will of the people.”In 2018, the Prison Policy Initiative showed that Oklahoma had the highest incarceration rate in the U.S. with 1,079 per 100,000 people. By the end of the day on Friday, Echols said the state was “no longer No. 1 in the nation in incarceration. This is a big deal and this is an exciting time.”More than 900 inmates applied for an early release as part of the new law. The state said it expects to have around 2,000 empty prison beds by the end of the year.”We all came together, and worked toward, to conduct a very thorough review process to ensure that those eligible for this commutation were actually in line with what the intent and the will of the people were,” Stitt said Friday. “More than 450 Oklahomans are getting a second chance.”As part of the process of preparing the inmates for life outside prison walls, the state hosted more than two dozen re-entry fairs for prospective early-release prisoners. Similar to a typical job fair, inmates could get a state ID or a driver’s license, advice on housing or educational opportunities or explore career opportunities.Stitt said more than 700 inmates met with 200 volunteers to enroll in programs designed to aid with a successful reintegration.Among those scheduled for release on Monday are 72 women, 11 of whom already have received their Oklahoma driver’s license or state ID card.”Having an official state ID or driver’s license is a huge hurdle for many former inmates as they try to integrate into society after prison,” the Oklahoma Department of Corrections said in a statement.Stitt said making sure the released inmates have a place to sleep and a job to work is they key to making sure they stay out of the prison system.”Recidivism goes way down when we can get people plugged in and working,” he said.Of the soon-to-be released inmates, according Oklahoma City ABC affiliate KOCO, the average age is nearly 40, with each having been in prison over the last three years. They are getting out about 16 months early on average.The state announced it would save $11.9 million annually due to the early-release program.Leaders from both parties praised the bi-partisan bill on Friday, saying that even in today’s political climate both parties could work together on commonsense laws for the people.”If we work together the way that we worked on this bill,” Democratic state Rep. Jason Dunnington said, “we can accomplish big things.”Copyright © 2019, ABC Audio. All rights reserved.