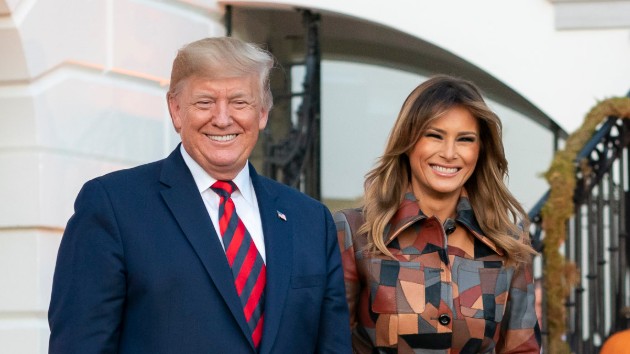 Official White House Photo by Tia Dufour(WASHINGTON) — President Donald Trump, a lifetime New Yorker long-linked to the Big Apple, has changed his official residence from Manhattan to Palm Beach, Florida. Trump, who was born in the New York borough of Queens and who for decades has lived at his Trump Tower in midtown Manhattan, signed a “declaration of domicile” in Palm Beach County, Florida, last month, in which he listed Trump Tower as his former home and the Mar-a-Lago Club, his resort in southern Florida, as his primary residence.His wife, first lady Melania Trump, made the same declaration earlier this month; both forms were processed by Palm Beach County on Oct. 4.The couple listed two other “places of abode” on their forms: 1600 Pennsylvania Avenue, in Washington — the address of the White House — and Trump National Golf Club in Bedminster, New Jersey, where the president likes to spend weekends and summer vacations. In a series of tweets Thursday night, after the New York Times first reported the changes, the president said that he cherished New York “and always will, but unfortunately, despite the fact that I pay millions of dollars in city, state and local taxes each year, I have been treated very badly by the political leaders of both the city and state.”

Trump has not released his tax returns, so it is not possible to fact check that claim.”I hated having to make … this decision,” he wrote, “but in the end it will be best for all concerned. As President, I will always be there to help New York and the great people of New York. It will always have a special place in my heart!”New York’s Democratic governor, Andrew Cuomo, said he was glad Trump was gone.”Good riddance,” Cuomo said in a statement. “It’s not like Mr. Trump paid taxes here anyway. He’s all yours, Florida.”Florida would likely provide tax benefits to the president, as it does for other wealthy New Yorkers who have made the move to the Sunshine State. The state has no income or inheritance taxes, while New York state’s top income tax rate is 8.82% and New York City’s top rate is 3.876%.The move could have political implications as well. Trump won Florida, where he has repeatedly campaigned, by a narrow margin over Hillary Clinton in 2016 and the swing state is seen as crucial for his 2020 re-election hopes. While state prosecutors in New York have been locked in a legal battle to obtain the president’s tax returns, in Florida, the first couple has found a generally warmer reception from state and local officials. Florida’s governor is Republican, as are both of its U.S. senators.Copyright © 2019, ABC Audio. All rights reserved.