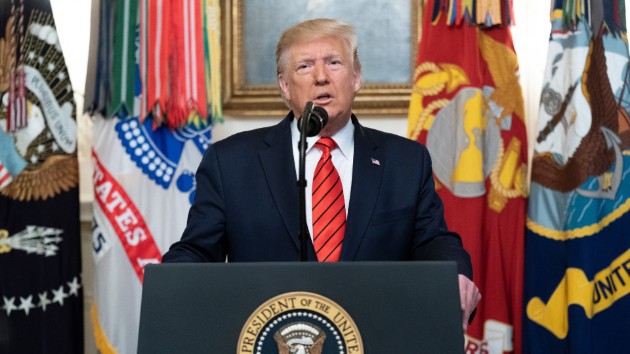 Official White House Photo by Shealah Craighead(NEW YORK) — Americans are split essentially even on impeaching President Donald Trump and removing him from office, with criticism on both sides of the issue — toward Trump, for his response to the inquiry, and toward congressional Democrats for holding their initial hearings behind closed doors. Against the backdrop of impeachment, Trump’s job approval rating is stable and low, at 38% in the latest ABC News/Washington Post poll, with one notable result: a career low in approval among Republicans, 74%, down steeply from a career-high 87% in July.The public is divided 49% to 47% on whether Congress should impeach Trump and remove him from office. Support for impeaching and removing Bill Clinton was lower, from 27% to 41% in ABC/Washington Post polls in 1998, with consistent majorities, 57% to 71%, opposed.

Support for removing Trump soared to 82% among Democrats, compared with 47% among independents and 18% among Republicans in the poll, produced for ABC by Langer Research Associates. Those are sharper partisan divisions than Clinton encountered two decades ago.As noted, there are concerns about both sides — 58% disapprove of the way Trump has responded to the impeachment inquiry, while 50% disapprove of how the Democrats in Congress have handled it overall. Moreover, 65% say initial hearings should be public — a rebuke of House Democrats who they’re seeking to address in their vote Thursday for open hearings.The public, by a 51% to 43% margin, said in the poll that by investigating Trump, congressional Democrats are mainly interested in hurting him politically rather than in upholding the Constitution. Yet by a wider margin, 55% to 36%, they also said the Republicans in Congress, in defending Trump, are more interested in helping him politically than in upholding the Constitution.Nor does House Speaker Nancy Pelosi get much in the way of public acclaim. Her job approval rating, at 38%, is identical to Trump’s, although fewer disapprove — 48% vs. 58% — are more are undecided.Substantively, 55% think Trump did “something wrong” in his dealings with Ukraine while 47% think it was “seriously wrong,” a view closely related to support for impeachment. Many fewer, 35%, said he did nothing wrong, with 10% undecided.Further, 60% say it was inappropriate for Trump to involve his personal lawyer, Rudy Giuliani, in U.S. policy toward Ukraine, with 83% of Democrats saying so and 61% of independents saying so, compared with 32% of Republicans.Given the Ukraine controversy, support for action against Trump is higher than support last summer for Congress beginning impeachment proceedings on other issues. In July, 37% supported such proceedings, compared with 49% for impeachment and removal now. Copyright © 2019, ABC Audio. All rights reserved.