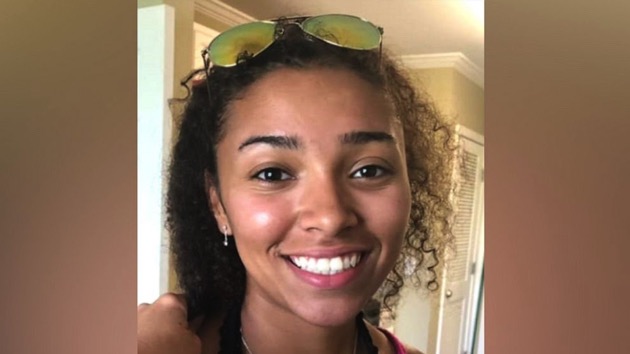 Auburn Police Department(MONTGOMERY, Ala.) — The professional fighting world is helping raise reward money for a UFC fighter’s stepdaughter who disappeared nearly 10 days ago.Aniah Haley Blanchard, a 19-year-old Alabama college student, was reported missing by her family on Oct. 24. She last communicated with a friend on Oct. 23, just before midnight, according to authorities.Police said evidence in the teen’s car, which was found abandoned near an apartment complex in Montgomery, Ala., on Oct. 25, indicates “she was harmed and is considered to be a victim of foul play,” police said in a statement Thursday.Blanchard is also the stepdaughter of mixed martial arts competitor Walt Harris.After UFC President Dana White pledged $25,000 toward the reward, UFC fighter Jon Jones wrote on Instagram Thursday: “add another 25,000 to that award.”An anonymous family from Homewood, Alabama, has offered a $25,000 reward, according to Montgomery Crime Stoppers. Alabama Gov. Kay Ivey contributed $5,000 and an anonymous individual contributed $5,000 via the Auburn Police, bringing the total reward money to $85,000 as of Friday, according to Montgomery Crime Stoppers.Dominance MMA founder Ali Abdelaziz said he’s also contributing $25,000 but that amount has not yet been added to the Crime Stoppers fund.”When you have children news like this is always heartbreaking, I can’t imagine what @thebigticket205 and his family are going through,” Abdelaziz tweeted Thursday. “If anybody gives info that leads to Aniah Blanchard, I will reward them w $25,000.”

When you have children news like this is always heartbreaking I can’t imagine what @thebigticket205 and his family are going through. If anybody gives info that leads to Aniah Blanchard I will reward them w $25,000. Call 911 @IridiumSports pic.twitter.com/3IQjgmtEyd