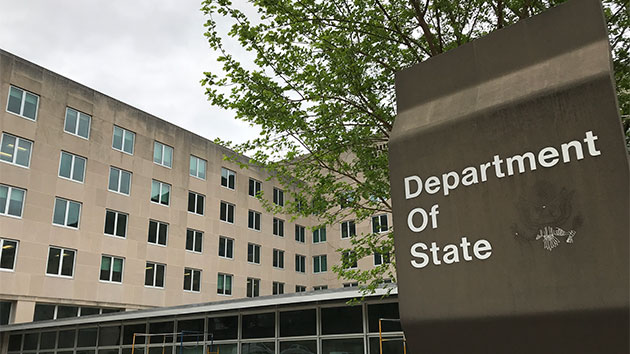 Kiyoshi Tanno/iStock(WASHINGTON) — The State Department is warning about a “rise in racially or ethnically motivated terrorism” that is “learning from their jihadist predecessors,” according to its top official for counter-terrorism. In its annual report on terrorism, the department also highlighted Iran’s enduring support for terrorism and terrorist groups and the end of ISIS’s hold on territory, but the spread of its “toxic ideology” — even warning of “vengeance” from its members over the recent death of its leader during a U.S. raid.But Ambassador-at-large for counter terrorism Nathan Sales warned about the new “international dimensions” of white supremacist and other racially-driven terrorism that has grown as a threat in recent years.”We know that white supremacists and other racially motivated organizations or networks communicate across international borders. We know that they are in a sense learning from their jihadist predecessors, in terms of their ability to raise money and move money, in terms of their ability to radicalize and recruit,” Sales said.According to the department’s report, many European countries, in particular Norway, France, Germany and the United Kingdom, have faced a greater number of plots and attacks, especially against religious and other minorities. While Sales referenced the white supremacist attack on Pittsburgh’s Tree of Life synagogue that killed 11 people, he deferred questions about domestic terrorism to the FBI and Department of Homeland Security, saying his authority started “at the water’s edge.”On Wednesday, acting Homeland Security Secretary Kevin McAleenan said the U.S. had noted “an increase in racially and ethnically motivated violence, particularly the threat posed by violent white supremacist extremists.”FBI Director Christopher Wray made the same point that Sales did Friday, saying law enforcement had seen a new trend of white supremacists connecting with “analogs” in other countries.”We are starting to see racially motivated violent extremists connecting with like-minded individuals overseas online,” Wray told the House Homeland Security Committee. “In some instances, we have seen some folks travel overseas to train,” particularly in eastern Europe.Recent studies have shown an increase in the number of far-right or white supremacist terror attacks, including against Jewish targets, although they remain a fraction of the total number of terror attacks. Sales said that in 2018, the Middle East, South Asia, and sub-Saharan Africa accounted for 85 percent of terror attacks, with 75 percent of attacks in just 10 countries.High atop that list is Iraq and Syria, despite U.S. forces, local Syrian Kurdish fighters, and a global coalition taking down ISIS’s so-called “caliphate” that stretched across both countries. While 7.7 million people were freed from ISIS’s “brutal rule,” according to Sales, the terror group’s “toxic ideology” spread further across the globe to include eight new affiliates that the U.S. sanctioned in 2018 alone. Beyond new affiliates, there were also ISIS-inspired attacks by “people who have never set foot in Syria or Iraq.”In particular, after ISIS leader Abu Bakr al-Baghdadi killed himself with an explosive device during a U.S. special forces raid, the terror group “seeks vengeance,” Sales said, adding, “We have to be prepared for any eventuality. We’re constantly on the lookout for ISIS plots to hit us or to hit our interests abroad.”One of the most pressing threats from the terror group is the approximately 10,000 fighters that are detained by Syrian Kurdish forces, known as the Syrian Democratic Forces or SDF. The Trump administration has consistently called for countries to take back their fighters for prosecution or rehabilitation, warning of jailbreaks because the detention camps they are in now are not sustainable.More than 100 fighters have escaped since Turkey launched an operation against the Syrian Kurds in northern Syria, according to U.S. officials. But Sales said the “majority” of them had been recaptured, citing SDF commander, General Mazloum Abdi, and a conversation he had with President Donald Trump.Sales said the U.S. was leading by example and had repatriated six adult ISIS fighters who are U.S. citizens for prosecution in the U.S. and 14 children for rehabilitation and reintegration into society. He declined to say more about their cases, in particular about the children out of respect for their privacy.But with ISIS scattered by the demise of the “caliphate,” there are also new warnings that al Qaeda is positioning itself and its affiliates to “reestablish itself as the vanguard of the global jihadist movement,” according to the report.Among those affiliates are groups in Syria that also have ties to Turkey. Sales said the U.S. is “concerned” about those groups after U.S. special envoy for Syria James Jeffrey testified last week that some are “extremist and dangerous.”Notably, there was one key country where there is little threat of terrorism, according to the report: Mexico. While President Trump repeatedly said last year that there were “terrorists coming through the southern border… They drive right in and they make a left,” the report contradicted that.At the end of 2018, there was “no credible evidence” that terrorists had bases in Mexico, worked directly with Mexican drug cartels, or sent operatives into the U.S, it said, and although the “U.S. southern border remains vulnerable to potential terrorist transit,” “terrorist groups are more likely to seek other means of trying to enter the United States.”Copyright © 2019, ABC Audio. All rights reserved.

Brothers Peter and Benjamin Bratt explain the inclusive conversation they want to have with the rerelease of ‘Follow Me Home’
See Queen Elizabeth II and Margaret Thatcher face off in ‘The Crown’ season 4 trailer
Zeta latest: Three dead, massive power outages, delayed early voting in Georgia
Nearly 30% increase in guns, drugs seized at northern border, CBP says
Jennifer Lopez reveals she almost wasn’t cast in ‘The Wedding Planner’
Kelly Ripa and Ryan Seacrest to give away $10,000 in prizes for virtual Halloween costume contest