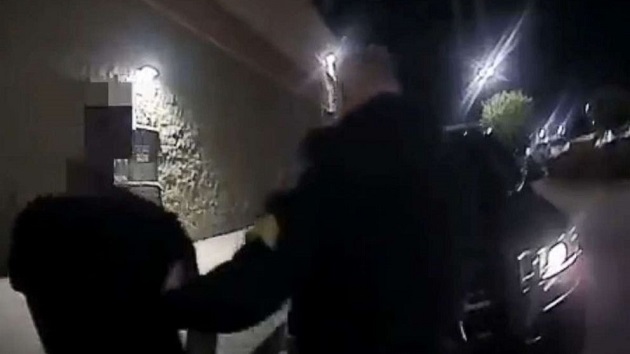 McKinney Police Department(MCKINNEY, Texas) — Police in McKinney, Texas, are disputing allegations of racism and excessive force levied by a family that’s accused two officers of slamming their 14-year-old son to the ground, placing him in a chokehold and dislocating his shoulder.The family shared on social media a cellphone video that appears to show McKinney Police Department officers arresting Jasper Miller, a freshman football player at Allen High School, after he was kicked out of a movie theater for allegedly being disruptive. The video appeared to be deleted late Thursday night.At one point, one of the officers appears to sit on Jasper’s back and stretch his arm behind him, according to his attorney — a maneuver that the family said left him with bruises and a dislocated shoulder.Police bodycam footage from the scene captured teenage bystanders as they yelled and pleaded for the officers not to “break his arm.””One of them had him in a chokehold and slammed him down, the other one got on top of him and literally ripped his arm apart — he has a separated AC joint,” family attorney Kim Cole told ABC News on Wednesday. “This is unacceptable. McKinney continues to ignore the pleas of their black and brown citizens.”But McKinney Mayor George Fuller said the incident had been misrepresented on social media.”There has been a short cell phone clip of the actual police contact and arrest posted by several people, but not any footage of the events/context in which the arrest took place,” Fuller said in a statement Wednesday. “Upon review of the bodycam footage, it is empirically clear that Jasper Miller resisted all directives given by the theater management and police officers, despite being warned repeatedly that he would be arrested if he did not comply with their requests.”Jasper was taken into custody on Saturday after he and his friends were ordered to leave a movie theater. Jasper says he was waiting for a ride along with his friends, who are also black, when he was cited for criminal trespass.Cole said the arrest was unjustified because the teens were waiting for a ride and had nowhere to go. She believes the officers, who are white, targeted the teens because they are black.”They are all minors and none of them drove there, so they had to wait for someone to come pick them up,” Cole said. “It’s cold, it’s dark and they had nowhere to go, so they were kind of loitering in front of the theater and for some reason the cop just kept harassing them.”Cellphone video shared by Jasper’s mother, Lakeista Eaton, sparked outrage from residents who accused the officers of targeting her son because of his race and abusing him.”The police officer abused his authority and took it too far,” Eaton told reporters at a press conference beside her husband on Wednesday. “My child, since Saturday, has been traumatized. He has waken up at night, he has told me that he has had flashbacks of how he was treated, how he was put in a cold cell and how he was talked to.””For me to see you treat him like this — when I know my child and how respectful he is — it hurts. And it hurts more for you to release a video to try to justify what you did to him,” she added.Cole said the mayor’s statement seemed like an attempt to justify the “brutal assault” instead of offering him an apology. The family said it plans to file a civil rights complaint against the city for false arrest and use of excessive force.Cole, who also represented a group of McKinney black teenagers who were manhandled by police during a pool party in 2015, said the city, which is made up of predominantly white residents, has a problem with racism.On Thursday, the police department said it was still investigating the case, but maintains that the officers “acted within the McKinney Police Department’s policy and according to public safety best practices.””Our officers take any use of force seriously, especially those where minors are involved. The officer’s body cameras captured the entire incident, which allowed for a complete investigation and review,” the department said in a statement. “There are some occasions when certain actions must be taken when people will not follow the instructions given by public safety officers. This was one of those occasions.”Copyright © 2019, ABC Audio. All rights reserved.