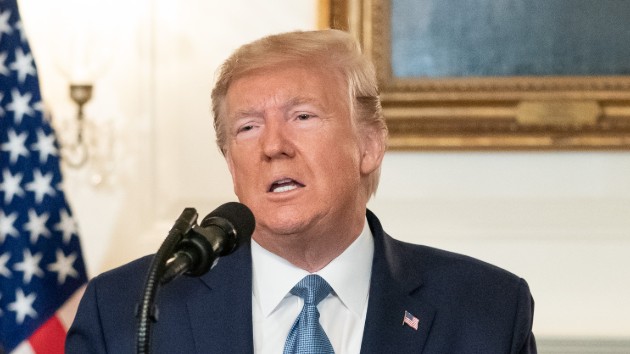 Official White House Photo by D. Myles Cullen(WASHINGTON) — President Donald Trump has thanked a White House official for his “honesty” after he testified that he, unlike others, was not worried that what he heard on a call between Trump and Ukraine’s president was illegal, although he did have other concerns.Tim Morrison, the senior director for Europe and Russia on the White House National Security Council, testified Thursday to House investigators that he was “not concerned that anything illegal was discussed” on a July 25 phone call between Trump and Ukrainian President Volodymyr Zelenskiy.”Thank you to Tim Morrison for your honesty,” Trump tweeted late Thursday night.

But the Crooked Democrats don’t want people to know this! Thank you to Tim Morrison for your honesty. https://t.co/1AxrArFJ6c

But what Trump did not mention was that in that same testimony, Morrison, the second current White House official to face investigators, corroborated elements of earlier testimony from William Taylor, the top U.S. diplomat in Ukraine, about the efforts to pressure Ukraine to open political investigations in exchange for military aid and a White House meeting between Trump and Zelenskiy. He was concerned about the possibility of the call notes leaking, and worried about “how it would play out in Washington’s polarized environment” and potentially politicize bipartisan support for Ukraine and impact Ukrainian opinion of the U.S.-Ukraine relationship.On Thursday, Trump praised Morrison’s testimony during an interview with the Washington Examiner in the Oval Office earlier Thursday.”Trump flicked through a pile of papers to hold up a copy of news clipping reporting on Morrison’s opening statement and said it was ‘fantastic,"” the Examiner reported. “He said: ‘This was going to be their star witness."”White House press secretary Stephanie Grisham said in an interview with Fox News on Friday that the White House expected Trump to be impeached. She said the inquiry led by House Democrats “has been set up to make — to impeach the president. So, that’s something that we’re expecting.””I wouldn’t say that it’s a foregone conclusion,” she later added. “I would say that we’re expecting it, yes.”The House on Thursday passed a resolution to authorize the ongoing impeachment inquiry, including open hearings, taking a pivotal new step in the process to investigate Trump’s dealings with Ukraine.In the hours after that historic vote, the president’s re-election campaign raised $3 million in online donations, according to the campaign.Trump on Friday plans to hold a campaign rally in Tupelo, Miss., his first public political event since Thursday’s House impeachment vote.The White House has so far refused to cooperate with House investigators, but Grisham on Friday would not rule out future participation – although she cast doubt on whether the administration would view the process as fair enough for it to participate.“If things are actually open and transparent as purported, I would imagine that we would participate,” Grisham said. “But again, if they’re going to have different rules and move the goalposts all the time, then that’s just not a fair process.”She referred to the inquiry as “the stupid impeachment sham from these Democrats.”On Thursday, Trump told the Examiner that he was considering reading aloud the rough transcript of his call with Zelenskiy for the American public to hear.”At some point, I’m going to sit down, perhaps as a fireside chat on live television, and I will read the transcript of the call, because people have to hear it,” Trump told the Examiner. “When you read it, it’s a straight call.”He also floated a plan to create t-shirts with the slogan, “Read the transcript,” according to the Examiner.Grisham told Fox News that the “fireside chat” idea was, in fact, “a serious consideration” but she said she did not “know what the logistics of it would look like just yet” and did not know when it would happen, if it did. Copyright © 2019, ABC Audio. All rights reserved.