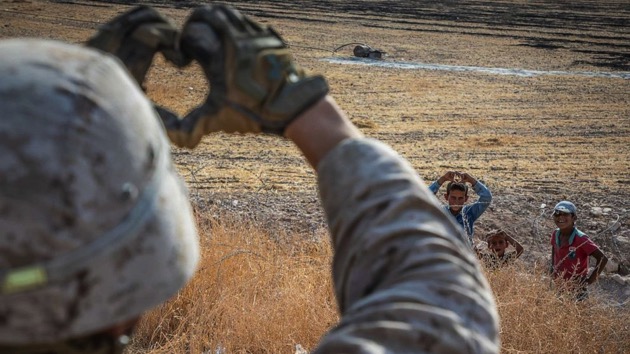 U.S. Marine Corps photo by Sgt. Branden J. Bourque(NEW YORK) — A United States Marine paused during his deployment in Syria to connect with three children standing nearby, a Defense Department photograph released on Thursday shows.The unidentified Marine, a member of 2nd Battalion, 7th Marine Regiment, is shown making a heart with his hands, mirroring one of the children standing beyond some barbed wire and brush.The photograph, taken by Sgt. Branden Bourque, was taken at the Kobane Landing Zone, a Marine Corps spokesperson told ABC News.Earlier this month, President Donald Trump directed the withdrawal of about 1,000 U.S. forces from northeastern Syria in an attempt to end what he described as an “endless war.” The airstrip is where U.S. troops have gathered to exit Syria in the northwestern part of the country.However, as many as 700 U.S. troops will remain in the country in two locations: in the south at the At Tanf Garrison and in the east near Deir ez Zor to guard oil facilities from falling into the hands of ISIS.The unit the Marine belongs to in the heartwarming photograph is part of the Special Purpose Marine Air-Ground Task Force – Crisis Response – Central Command (SPMAGTF-CR-CC), a rotational force in the Middle East that can be deployed on short notice to provide security.The U.S. has had presence a presence in Syria since 2015, working with America’s Kurdish allies to defeat the Islamic State. Copyright © 2019, ABC Audio. All rights reserved.