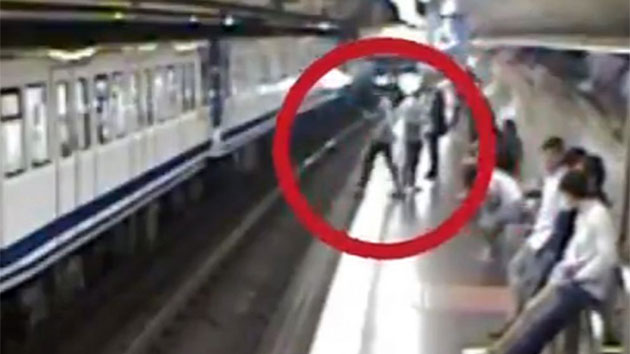 Metro de Madrid/Twitter(MADRID) — A woman looking down at her phone in a crowded train station fell onto the tracks of the subway in Madrid just as the train was entering the station.In Oct. 24 surveillance video shared by Metro Madrid, you can see one train pull into the station on the opposite side of the tracks as most straphangers were chatting, sitting or on their phones waiting for their train. Then, one woman gets up and walks toward the wrong train as she looks at her phone. She takes one step off the platform and falls onto the tracks just as a train is barreling toward her.The video cuts away just as onlookers jump onto the tracks to help the woman.“For your safety, look up [from] your mobile when you walk along the platform,” Metro Madrid tweeted, posting a message with the video that warns people to pay attention when they use the subway.

“Not looking up when you are waiting for the subway is a distraction that can be expensive,” according to Metro Madrid, which noted that the “traveler was fine.”