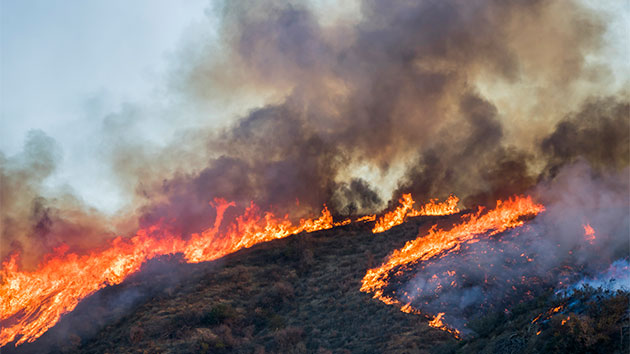 Erin Donalson/iStock(LOS ANGELES) —  Firefighters in Southern California made “good progress” overnight as they fought the Maria Fire that erupted two days ago and spread quickly, officials said Saturday.The fire was 20% contained as of Saturday morning, a positive development from its 0% containment late Friday afternoon, the Ventura County Fire Department said.Evacuation orders had been lifted for multiple streets in the Saticoy Country Club neighborhood, while residents on certain streets in the South Mountain area and Santa Paula area remained under evacuation, according to the California Department of Forestry and Fire Protection (Cal Fire).Around 8,000 residents had been forced to evacuate the day before.Despite the progress, the blaze continued to move through Ventura County and grew to 9,412 acres from 8,700, according to the fire department.Firefighters are still battling Maria, which broke out Thursday around 6 p.m.It came amid a week of severe weather, including the historic Santa Ana wind event that threatened to make already-damaging wildfires across the state more unmanageable.The Kincade Fire in Northern California’s Sonoma County reached 77,758 acres. It was 72% contained as of Saturday morning, while the Hillside Fire in the southern part of the state, in San Bernardino County, spread almost 500 acres and was 95% contained, according to Cal Fire.The remaining Red Flag Warnings are set to expire at 6 p.m. local time Saturday.