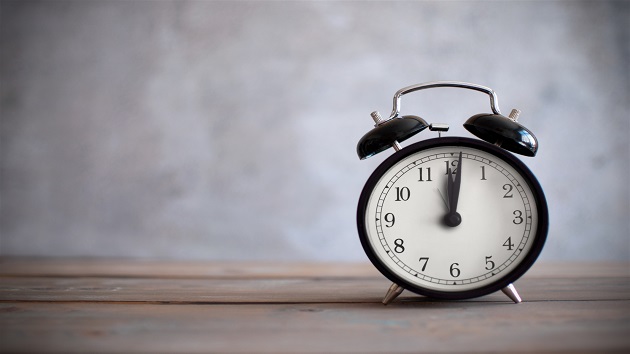 iStock/CharlieAJA(NEW YORK) — Most Americans will be moving their clocks back every fall to end daylight saving time, but at least two U.S. states are looking to end the tradition of re-setting the time twice a year altogether.Oregon and Washington state have both passed legislation to maintain daylight saving time year-round, but the Oregon legislation states that California also must do so before the law can go into effect, The Oregonian reported. A bill has been introduced, but California has not yet passed a similar law.A bill to allow the Sunshine State to remain on daylight saving time year-round was signed into law in 2018 but cannot be enacted without congressional approval, according to ABC Tampa affiliate WFTS. If the Sunshine Protection Act is passed, Florida residents will be able to enjoy more evening sunshine in the winter by forgoing setting the clocks back in the fall.Arkansas, Nevada, and Tennessee have also passed laws to ditch the time change, but they have not yet been enacted.The state of Massachusetts is considering ditching daylight saving time altogether for the Atlantic Standard Time, joining places like Nova Scotia and Puerto Rico, according to Boston.com. Since New England is hundreds of miles farther east than other areas in Eastern Standard Time, it gets darker much earlier.Other states in the Northeast are considering the move as well. Last year, the Maine House and Senate passed separate bills in support of ditching daylight saving time, but only if Massachusetts and New Hampshire do too, Boston.com reported. A bill to move to Atlantic Standard Time has also been introduced in Connecticut, New Hampshire and Rhode Island.Legislation to make daylights savings time permanent have also been introduced in Colorado, Delaware, Georgia, Illinois, Iowa, Minnesota, Missouri, North Carolina, Ohio, Oklahoma, South Carolina, Texas, Utah and Vermont. Similar legislation has been struck down in Idaho, Mississippi, New Mexico, Virginia, West Virginia and Wyoming.Hawaii does not observe daylight saving time, and neither does Arizona, minus the Navajo Nation in the northeastern part of the state, according to NASA. Indiana began practicing daylight saving time in 2006.What is daylight saving time?It was invented to make the best use of daylight hours. Benjamin Franklin created the concept of daylight saving time, according to NASA, and it has been used throughout much of the U.S., Canada and Europe since World War I.

Any state can opt out of itAll it has to do is pass a state law.The official start/stop dates have been amended multiple timesIn 1966, former President Lyndon Johnson signed a law stating that daylight saving time begins on the last Sunday of April and ends on the last Sunday in October of each year, according to NASA.The law was amended in 1986, and daylight saving time officially began on the first Sunday in April, but the end date remained the same.Former President George W. Bush signed an energy policy bill in 2005 that would extend Daylight Saving Time by four weeks, beginning on the second Sunday of March, according to NASA, and it went into effect in 2007.It’s referred to as “summer time” in EuropeMost of Europe observe summer time, which begins on the last Sunday of March and ends on the last Sunday of October.It may affect your healthAccording to Health.com, In vitro fertilization success rates drop in March, immediately following the time change. In addition, heart attacks spike after the spring time change, and the number of strokes rises when daylight saving time starts and ends.Exhaustion and fatigue are a common effect as well, especially in teenagers, Health.com reported.Tips to alleviate the switchThose worried about easing into a new schedule can take small steps like eating dinner early, using a lightbox in the morning, taking an afternoon nap and avoiding screens before bedtime. For tips on how to survive the start of daylight saving time, read here.Copyright © 2019, ABC Audio. All rights reserved.