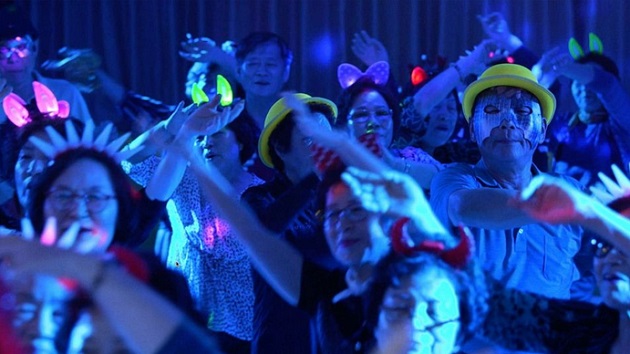 ABC News(SEOUL, South Korea) — Surrounded by psychedelic lights bouncing off a glittery mirror ball, more than 100 gray-haired men and women gather at the disco stage in Seoul twice a week to dance their afternoon away. In this disco party strictly reserved for seniors over 60, some even put on flashy masquerade masks, wigs and costumes to twirl and bop while singing along to local hits. In a rapidly aging society, the weekly senior disco party is one example of the local government’s efforts to keep South Korea’s elderly population healthy and socially engaged. “We wanted to bring the dance culture closer to the elders in their 70s and 80s by reproducing an environment of their rebellious teenage years when they went go-go dancing with disco bell-bottoms and greaser hair,” Lee Do-sun, director of a welfare care center in eastern Seoul that hosts the popular senior disco program, told ABC News.As of 2018, senior citizens accounted for nearly 15% of South Korean population, according to Statistics Korea. A record-low birth rate and increased life expectancy are seen as the main factors contributing to the fast-growing aging population. The agency forecasts that by 2067, almost half of the country’s population could consist of people over 65.Activities such as freestyle dancing help seniors move muscles they wouldn’t normally use and participating in mass sing-alongs can be effective in preventing Alzheimer’s, Lee said.“I can’t even begin to describe how great this program is, both mentally and physically. It’s good for my health and I get to relieve my stress,” Byeon Jeong-ja, 78, who frequents the senior discothèque, told ABC News. Cho Sun-bun, 75, who danced fervently with a red polka-dotted hair bow, said the program made her feel “20 years younger.”More importantly, however, the weekly senior disco party appears to have helped break down some of the distrust and hostility that existed among people of different socioeconomic backgrounds. A trio of discothèque-goers who became good friends thanks to the program said that having a chance to constantly socialize with one another makes it natural to build positive relationships. They felt that attendees become more considerate and communicative despite their different backgrounds, which attracts more and more people to the program each time.Programs for South Korea’s senior citizens extend beyond governmental efforts. Korea Health Industry Development Institute estimated that the market targeting the senior population, dubbed the “silver economy,” will grow to be a nearly 73 trillion KRW ($62.1 billion) industry by 2020 in eight sectors, notably in leisure and entertainment.The Show Project, a modeling academy and agency, offers special training programs for seniors wanting to strike a pose. Their lessons on runway-walking and posing techniques are specifically designed to accommodate students mainly in their 50s and 60s who have different levels of stamina, muscular strength, cognitive abilities, and expressiveness from traditionally younger models, according to the academy director Choe Yun.“Seniors don’t have a whole lot to do after retirement except to swan around. But challenging myself to realize my dream gives me so much hope and joy,” said Choi Soon-hwa, who continues to attend the academy while working as the country’s oldest professional fashion model at age 77. “It’s not really about achieving fame. It’s about being truly happy, stylish, and graceful.”After months-long lessons, some trainees realize their dreams as they strut down the catwalk at Seoul Fashion Week. For decades, Kim Chil-doo had to work different jobs selling clothes, groceries, and rice soup to make ends meet before coming across a modeling class for seniors. Now, at the age of 65 when most people enter retirement, Kim charismatically walks down the runway with his signature grey beard and wavy hair.“As you age, you’re upstaged in life and are considered useless in the eyes of society,” senior modeling trainee Lee Gil-woo told ABC News. “But regaining confidence that once withered away feels amazing.”