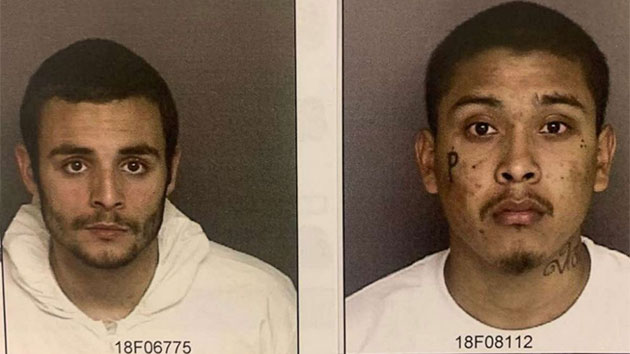 Monterey County Sheriffs Office(MONTEREY, Calif.) —  Authorities are fanning out across Central California after two murder suspects escaped from jail in Monterey on Sunday.Santos Fonseca, 21, and Jonathan Salazar, 20, escaped from custody of the Monterey County Sheriff’s Office, the office said.The pair escaped Sunday morning, but no further details of the jailbreak were released by authorities.Fonseca was being held on $2.25 million bail for murder and was also being held on an attempted robbery charge, according to court records. He had been booked on June 7, 2018.He was allegedly responsible for the shooting deaths of two people in early June 2018, according to The Californian.Salazar, who was arrested on July 7, 2018, was implicated in a murder from October 2017, according to the Salinas Police Department. He and an unnamed minor were charged with the killing of Jaime Martinez and the attempted murder of Martinez’s girlfriend after Salazar allegedly fired into the couple’s car with their 18-month-old child inside, according to The Californian. The child was uninjured.Salinas police called the shooting “gang-related.”Salazar was also being held on charges of vehicle theft, conspiracy to commit a crime, violation of probation and possession of a stolen vehicle, according to court records.The Monterey County Jail is located in Salinas, about an hour south of San Jose.Authorities have asked anyone with information on the escapees’ whereabouts to call 831-755-3722. Copyright © 2019, ABC Audio. All rights reserved.