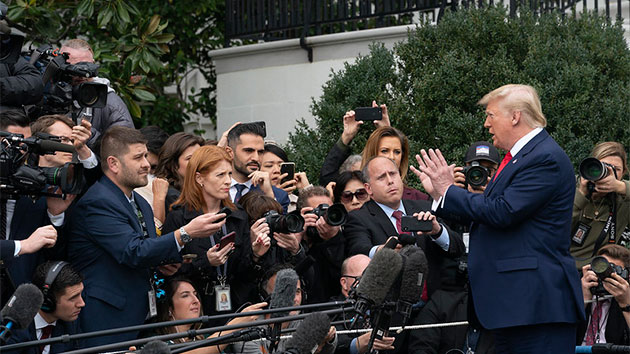 Official White House Photo: Joyce N. Boghosian(WASHINGTON) — Four White House officials slated for closed-door depositions Monday are not expected to show up on Capitol Hill despite the threat of subpoena from the committees leading the growing impeachment inquiry into President Donald Trump related to Ukraine, multiple senior-level sources told ABC News.House Democrats have a packed schedule this week as depositions continue behind closed doors.On Monday, Democrats had hoped to hear from four current White House officials, including John Eisenberg, deputy counsel to the president for National Security Affairs; Michael Ellis, senior associate counsel to the president; Robert Blair, a top aide to the chief of staff; and Brian McCormack, an official with the office of management and budgetTwo of those officials, Eisenberg and McCormack, have already been subpoenaed for their respective depositions. Ellis and Blair have only been requested to appear at this time.The White House has pushed back on permitting current and former officials to comply with requests and subpoenas from Congress in part because White House lawyers have not been permitted inside the closed-door interviews.Current National Security Council adviser Lt. Col. Alexander Vindman and former National Security Council aide Tim Morrison did comply with congressional requests last week, however, they are career officials and not political appointees like the four individuals slated for Monday.An attorney for Blair told the Financial Times that his client is not planning to attend Monday’s hearing although his client has not been served with a subpoena.”Mr Blair is caught between the assertions of legal duty by two coequal branches of government, a conflict which he cannot resolve. … Mr Blair has respectfully declined to appear and testify. Nevertheless, he will fulfil all his legal duties once that conflict is appropriately resolved,” attorney Whitney Ellerman told the paper.Blair’s position is similar to that of former deputy national security adviser Dr. Charles Kupperman. Kupperman took things a step further last week filing a civil lawsuit to seek input from a federal judge on whom to comply with — his former employers at the White House who requested he not comply, or lawmakers on Capitol Hill that have subpoenaed him for testimony.His lawyer, Charles Cooper, argued last week in D.C. District Court that his client is in a “catch 22.” That case is slated for oral arguments in December.Cooper is also representing Kupperman’s former boss — ex-national security adviser John Bolton — who was invited by the House for a deposition later this week. Bolton’s attorney said he will not comply with that request, however, if the committee wants to subpoena him they can.It’s unlikely Bolton would immediately comply with that subpoena, according to sources familiar with his thinking. Copyright © 2019, ABC Audio. All rights reserved.

Months after father of four murdered in Florida, wife still searching for answers