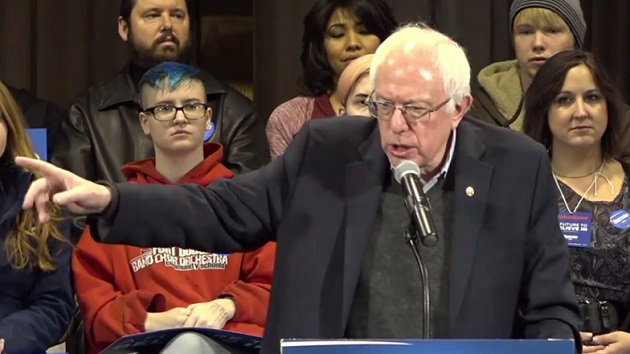 ABC News(DES MOINES, Iowa) — Sen. Bernie Sanders, often credited for bringing Medicare for All to the forefront of the 2020 presidential race, defended his way of funding the plan up the against the newly-released outline from his progressive opponent, Sen. Elizabeth Warren, calling his way “far more progressive” and saying that Warren’s plan could have a “very negative impact” on job creation.“The function of health care is to provide health care to all people, not to make $100 billion in profits for the insurance companies and the drug companies. So, Elizabeth Warren and I agree on that. We do disagree on how you fund it. I think the approach that (I) have, in fact, will be much more progressive in terms of protecting the financial well being of middle income families,” Sanders, I-Vt., told ABC News’ Rachel Scott on the campaign trail in Iowa. The two candidates spoke on the phone about her plan after it was released, Sanders said.Before announcing her own way to fund Medicare for All, Warren frequently said she’s “with Bernie” on the plan and emphasized that she fully supports it as the best way to get health care coverage to all Americans. But Warren’s newly-released plan has provided one of the clearest differences between her and Sanders, two of the most progressive candidates in the race.Sanders has said his plan would be funded by a tax hike, including a hike on middle class Americans, and analysts estimate it would cost upwards of $30 trillion over 10 years — while Warren’s plan pledges no middle class tax increases and estimates a cost of $20.5 trillion over 10 years.Of his own plan to fund Medicare for All, Sanders said, “It would raise taxes on the middle class, but it would substantially reduce the cost of health care for the average American. Because we’re doing away with all premiums, copayments, deductibles and out of pocket expenses. So for the overwhelming majority of the American people, they would save and save substantially on their health care bills.” Sanders also told ABC News he thinks Warren’s plan could have a “very negative impact” on creating jobs because of the funds it would draw from employers. Warren’s plan calls for nearly $9 trillion from employers who would pay the government a slightly smaller percentage of what they currently pay to supply their employees with health insurance.Warren’s plan calls it an “employer Medicare contribution.”“I think that that would probably have a very negative impact on creating those jobs, or providing wages, increased wages and benefits for those workers,” Sanders told ABC News. “So I think we have a better way, which is a 7.5% payroll tax, which is far more I think progressive, because it’ll not impact employers of low wage workers but hit significantly employers of upper income people.”Warren, who was also campaigning in Iowa on Saturday, defended her plan against Sanders’ criticism.”All I can say is that employers will pay the same as they’re paying currently under Obamacare. In fact, they pay a little bit less. We stabilize it at 98% of what they’re paying right now and they won’t have to have HR departments that are wrestling with insurance companies. So this is something that’s going to help employers,” Warren told reporters after her town hall event at a high school gymnasium in Dubuque.”And the cost of having employers contribute to the health care has been built into the law since Obamacare passed in 2010. That’s just current law, nothing’s changing there,” she said, referring to the Affordable Care Act signed into law by then-President Barack Obama.Asked if she believed her plan was more progressive than Sanders, Warren said, “I think it’s progressive when not a single person who makes less than a billion dollars has to pay one penny in additional taxes.””That’s going to be an enormous benefit for middle class families, for working families, for the working poor. Think what that’s going to mean to them,” Warren said. “And think what it’s going to mean for small businesses. For these little tiny businesses that right now can’t afford to offer medical care for their employees, and that means they’re at a competitive disadvantage. Because it’s hard to attract people if you don’t offer health care. Think what it means for all the people who’ve wanted to start their own businesses but they’re afraid to walk away from their health insurance. They’re afraid they won’t be able to afford it on their own.”Sanders is not the first candidate to criticize Warren’s long-awaited plan, which she released after fielding questions from many of her Democratic opponents on the debate stage last month, including fellow front-runner Joe Biden.But the plan did not quell her primary opponents’ criticism.”Time to get real,” Biden told ABC News on Friday night after a large-scale Democratic dinner in Des Moines. In an earlier statement on the plan, Biden’s campaign called it “mathematical gymnastics.”In addition to calling for $9 trillion from employers, Warren’s plan also relies heavily on taxing billionaires and large corporations, as well as implementing stronger enforcement of tax laws. Then, about 5% of the funds would come from cutting defense spending and achieving immigration reform — two revenue streams that would be contingent upon those proposals making their way through Congress. Immigration reform, in particular, has faced years of back-and-forth on Capitol Hill without much movement.Closing out her speech Saturday night in Dubuque, Warren seemed to offer a response to her detractors.”It’s easy to give up on big ideas. It’s easy to sound smart and sophisticated when you just give up on those ideas. But here’s the deal. When we give up on big ideas, we give up on the people whose lives would be touched by those ideas. And those people are already in a fight. People who are struggling to pay their medical bills are already in a fight,” Warren said. Copyright © 2019, ABC Audio. All rights reserved.