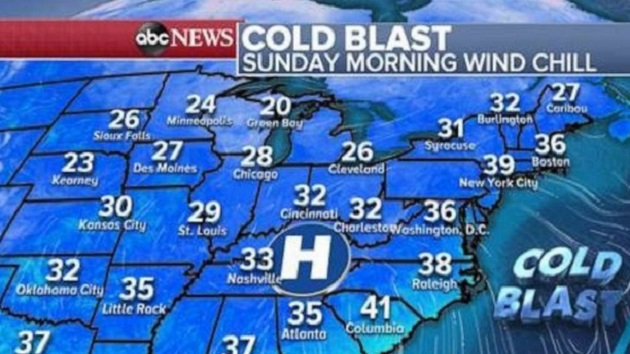 ABC News(NEW YORK) — As cold air settles in across much of the U.S. this weekend, we’re seeing little in the way of hazardous weather. The fire weather threat in Southern California is finally over, with conditions improving today. This morning wind chills are in the 20s and 30s for nearly two-thirds of the nation. It’s feeling quite cold across parts of the deep South and southeast, where wind chills are in the 30s from Texas to the Carolinas.Another reinforcing shot of cold air will reach the East Coast by Monday, with wind chills once again in the 30s for nearly everyone from Georgia to Maine.Cold air moving over the relatively warm Great Lakes is causing lake effect snow this morning. Some snow bands are currently moving through parts of upstate New York, where 3”-6” of snow will be possible today in the areas that are usually very prone to lake effect snow. Winter weather advisories have been issued for those areas.Later Sunday night, a weak system will move through the Upper Midwest and into the Great Lakes. The system will bring a quick round of both rain and snow to the region. Snow accumulations should remain rather light.As the storm moves into Southern Canada, it will bring another shot of colder air over the lakes and likely cause some lake effect snow in parts of Northern Michigan, where there could be some localized accumulation.For the most part, the next few days lack truly organized storms with notable hazards. However, the next weather story is in sight this week.As the week progresses we will see cold air from Canada get stronger, and a couple of waves of cold air will push the jet stream south and move into the eastern half of the nation.By the end of the upcoming week, the cold air could become quite notable, with nearly everyone east of the Rockies seeing below average temperatures — especially from Chicago to New York and Boston.Although it is too early to determine the magnitude of the cold air, there are strengthening indications that it will feel much more like winter from the Midwest to Northeast. Now would be a great time to get the winter gear out, because it is likely you will needed it.Additionally, this jet stream pattern can be quite active and there are subtle indications that a colder storm could develop at the end of the week — though it is too early to determine the organization and magnitude of such a storm. Copyright © 2019, ABC Audio. All rights reserved.