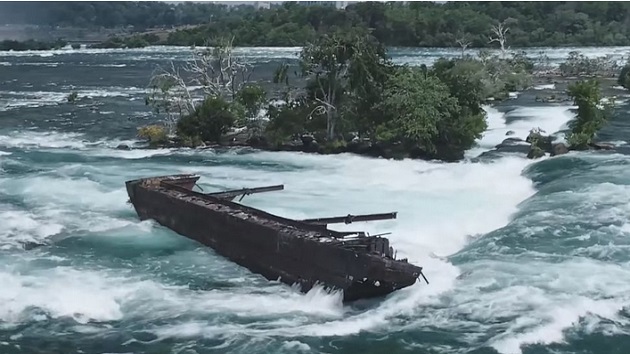 Niagara Parks/Facebook(NIAGARA FALLS, Canada) — A barge that has been stuck atop some rocks in Niagara Falls for more than 100 years has finally shifted as a result of severe weather. The Iron Scow, a flat-bottomed ship used to carry cargo in shallow waters in the 19th and 20th centuries, has been lodged in upper rapids of Niagara Falls — about 600 meters from the brink Horseshoe Falls — since August 1918, after it broke loose from its towing tug, according to the Niagara Parks Commission.After the two men aboard the vessel were rescued, crews determined that a salvage operation was not feasible, and it’s been deteriorating in that spot ever since.Heavy wind and rain on Halloween shifted the scow, Jim Hill, Niagara Parks Commission senior manager of heritage, said in a video produced by the commission.The boat has been flipped on its side, spun around and moved about 50 meters down river from its original spot, Hill said.It is unclear whether the heavy flow of the river will continue to move the scow further.”It could be stuck there for days or it could be stuck there for years,” Hill said. “It’s anyone’s guess.”Copyright © 2019, ABC Audio. All rights reserved.