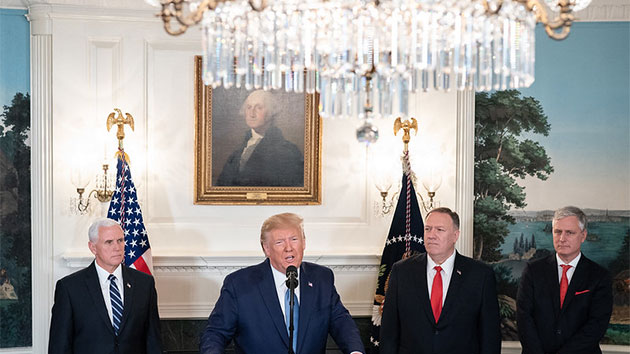 Official White House Photo by Shealah Craighead(WASHINGTON) —  The first Ukraine whistleblower has offered through their legal team to answer congressional Republicans’ written questions directly to them and under penalty of perjury, bypassing Democrats who control the impeachment process, attorney Mark Zaid confirmed to ABC News on Sunday.Zaid said the original offer to answer written questions was to the full House Intelligence Committee, under the control of Chairman Rep. Adam Schiff, D-Calif. Republicans have complained about the unfairness of the closed-door depositions and impeachment process, with some suggesting the whistleblower’s identity should be known so President Donald Trump can face his accuser.”Now we have offered directly to the GOP. They have no excuses,” Zaid told ABC News on Sunday.The story was first reported by CBS.Rep. Jim Jordan, the top Republican on the House Oversight Committee, said in a statement Sunday evening that written answers would not be “sufficient.””Written answers will not provide a sufficient opportunity to probe all the relevant facts and cross examine the so-called Whistleblower,” Jordan, from Ohio, said. “You don’t get to ignite an impeachment effort and never account for your actions and role in orchestrating it.””We have serious questions about this individual’s political bias and partisan motivations and it seems Mark Zaid and Adam Schiff are attempting to hide these facts from public scrutiny,” he continued. “Last week’s testimony raised even more concerns about the anonymous whistleblower and our need to hear from them, in person.”An unidentified member of the intelligence community filed a complaint with Michael Atkinson, the inspector general for the intelligence community, on Aug. 12 in which they outlined several instances of concern related to the president’s communications with a foreign leader. But the news of the complaint was not reported until Sept. 18 in The Washington Post, with later reports confirming that the complaint was about Trump’s July 25 call with Ukrainian President Volodymyr Zelenskiy.The call prompted the House and Speaker Nancy Pelosi to launch an impeachment inquiry in the following days.Zaid made the offer to top Republican on the committee, Rep. Devin Nunes, who has not yet given an official answer. If Nunes agrees, it could mean two separate streams of written questions.Nunes did not immediately respond to an ABC News query about the offer.The president kept up his stream of calls for the whistleblower to reveal themselves on Sunday morning, tweeting, “The Whistleblower got it sooo wrong that HE must come forward. The Fake News Media knows who he is but, being an arm of the Democrat Party, don’t want to reveal him because there would be hell to pay. Reveal the Whistleblower and end the Impeachment Hoax!”He followed that up with a tweet Sunday afternoon, saying, “The Fake News Media is working hard so that information about the Whistleblower’s identity, which may be very bad for them and their Democrat partners, never reaches the Public.”Copyright © 2019, ABC Audio. All rights reserved.