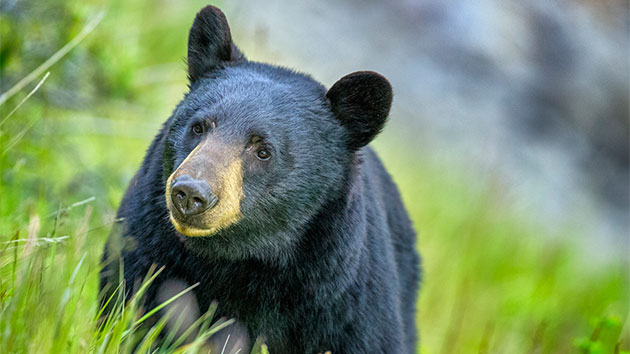 Don White/iStock(MOUNT STERLING, N.C.) — A black bear died after attacking a hunter whose companion had shot it in the North Carolina woods.A group of at least three men were hunting near Mount Sterling in Haywood County on Saturday morning when their dogs noticed a bear that was up in the tree, Capt. Andrew Helton, law enforcement officer for the North Carolina Wildlife Resource Commission, told ABC News.After one of the hunters gathered the dogs up, another one shot the bear, striking it three or four times, Helton said.The bear then came down the tree and attacked the hunter holding the dogs. The encounter only stopped after the pair rolled down an embankment, and “the bear continued on it’s own path,” Helton said.Because the group was in such a remote area, it took several hours for the injured hunter’s companions to find their way out of the woods and then direct paramedics to his location, Helton said. The injured hunter was bitten in his stomach and had bite and claw marks to his leg. He also had a fractured pelvic bone and a back injury but was treated and later released from the hospital.The bear, a male weighing about 375 pounds, was later found dead near a creek about 100 yards from where the injured hunter was located, Helton said. It died from the gunshot wounds.The bear’s remains have been sent to a lab to be tested for rabies and other diseases.The commission is conducting an investigation on the attack, Helton said.It is currently bear hunting season in the mountains of North Carolina, according to the commission. The season runs until Nov. 23 and then picks back up again between Dec. 16 and Jan. 1. Copyright © 2019, ABC Audio. All rights reserved.