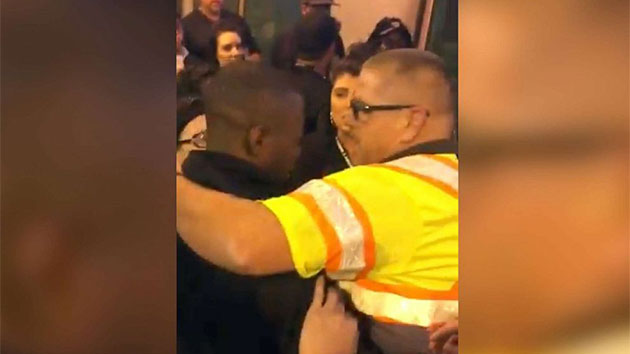 Tony Badilla via Twitter(OAKLAND, Calif.) —  Surveillance cameras captured a fast-acting transportation worker on Sunday as he rescued a man by pulling him off the tracks just a split second before an oncoming train hit him.The video shows Bay Area Rapid Transit transportation supervisor John O’Connor jumping into action at the Oakland, California, station after a man stumbled and fell onto the tracks as a train approached.O’Connor, 24, miraculously grabbed the man by his shoulders and lifted him up to the platform safely with just seconds to spare. He said the train was about 60 feet away when the man fell.”I just looked at him and said, ‘He’s not going to make it.’ Let me see, because it’s hard to get out of there,” O’Connor told reporters Monday. “It is not like you could just jump up and get out of there. You know, I was just fortunate God put me there and he got to see another day.”O’Connor said he was conducting a bit of crowd control at the Coliseum BART station following an Oakland Raiders game Sunday night when he saw the unidentified man fall.He said it feels “a little awkward” to be called a hero because first responders like police officers and firefighters save lives on a daily basis with very little recognition.”I feel humbled in having been given an opportunity to save someone’s life, but it feels a little awkward to be declared a hero,” O’Connor said. “I’d like to think that anybody else in that situation would have done the same thing.”However, he said he does have a few words of wisdom for the man he saved: “Today is the first day of the rest of your life. Try to use a little more caution and go out and do something good with your life. Enjoy the rest of the days God blessed you with.”A BART spokesperson said the man who fell underwent a medical evaluation after the accident. Police said he was fine, but intoxicated.