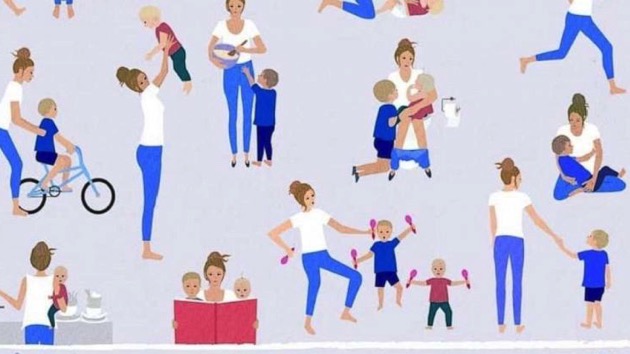 Paula Kuka / @common_wild(NEW YORK) — If you’re a mom on social media, there’s a good chance you saw an illustration shared more than once last week.It was created by Paula Kuka, who told Good Morning America it was response to an illustration in an Australian newspaper she thinks is unfair to moms.It depicted “a mother looking at her phone and not noticing her baby had fallen out of the pram. It was accompanied by a poem that finished with the line ‘wishing that he was loved like a phone,”‘ Kuka said.”I do completely agree with sentiment that we are addicted to our phones and it is to the detriment of social engagement,” she told GMA. “But to specifically target new mothers seemed unfair and possibly harmful. Post-natal depression and anxiety affects more than 1 in 7 Australian women. When I saw the cartoon, I couldn’t help but feel defensive for any new mother who takes a moment for herself to look at her phone and is judged by strangers for her parenting.”The “irony,” Kuka said, is that most of the time moms are on their phones, making doctor appointments, shopping lists, reading school emails or running a business while also taking care of children.Kuka points out that while mobile phones are unique to this generation of mothers — many are among the first to grow up with smartphones — there have always been distractions. Still, moms today are expected to be more hands-on than ever before, she said.”My drawing aimed to highlight what you don’t see. I just sat down and drew all the things I might do at home with my kids, when the public gaze isn’t on me. Playing, cleaning, cooking, reading, dancing and comforting them,” Kuka said. “I drew it in not as a way to vilify the original cartoonist, but out of compassion for other mothers, with the hope I might make something stop and think before they judge a mother in public as they are only seeing a tiny fraction of what really goes on.”Copyright © 2019, ABC Audio. All rights reserved.

Donald Trump, Joe Biden address Puerto Rico’s ongoing crisis weeks before the elections
Ruth Bader Ginsburg represented what ‘is best about America’: Bill Clinton
Pelosi says Democrats will ‘use every arrow in our quiver’ to block Trump’s Supreme Court nominee
Breaking down the Supreme Court nomination, confirmation process
Trump’s leadership is ‘opposite of racism’: Kim Klacik on ‘The View’
Challenges aside, Emmy producers Reginald Hudlin and Ian Stewart say the show will be “great”