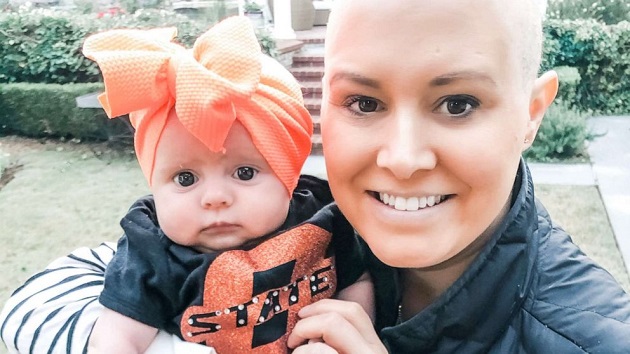 Brooke Clay Taylor(NEW YORK) — Brooke Taylor said it was “maternal instinct” during her pregnancy that led her to push her doctor to feel a lump in her breast that resulted in a breast cancer diagnosis on the same day she gave birth to her first child.Taylor, 32, of Oklahoma, noticed the lump in one breast during her pregnancy but said her doctor advised her to wait and see because it could be pregnancy-related. At her 38-week OBYGN appointment a few weeks later, Taylor, of Gore, Oklahoma, brought up the lump again and then demanded that her doctor examine it.”I actually took off my shirt and said, ‘I’m not leaving until you feel this,"” Taylor told ABC News’ Good Morning America. “I will never forget the look on her face when she felt the lump. I saw the color drain from her face and she looked at me.”Taylor had an ultrasound and a biopsy performed on the lump the next day. A breast health surgeon called her at home early the next morning, July 22, to tell her she had breast cancer.”I waddled into the bedroom where my husband was and I just let myself cry,” recalled Taylor. “But I didn’t cry for very long because my OBGYN called and said, ‘How fast can you get here?"”During their drive to the OBGYN’s office, the couple was diverted to the hospital so Taylor could undergo an emergency C-section and quickly begin her cancer treatments.Elsie James Taylor was born at 2:04 p.m. on July 22, roughly six hours after her mom learned she had breast cancer.”It was a miracle in itself that she was healthy and ready to join the world,” Taylor said of Elsie, who was born without complications at 38 weeks. “We spent the whole day just being kind of in shock and enjoying our new baby.”Taylor quickly huddled with doctors in her labor and delivery room learning about her diagnosis and the long treatment road ahead.She was diagnosed with Stage 3 invasive ductal breast cancer. Doctors found two tumors in her right breast and one tumor in her left breast and discovered she carries the BRCA1 gene, which can greatly increase a woman’s risk of developing cancer, particularly breast and ovarian cancers.Within two weeks of having a baby, Taylor, with her husband Damon by her side, began the first of her 16 rounds of chemotherapy.The chemotherapy — expected to last 20 weeks — will be followed by a double mastectomy, then six weeks of radiation and then breast reconstruction surgery after that followed later on by a possible surgery, if Taylor chooses, to remove her ovaries and fallopian tubes to help reduce the risk of ovarian cancer that the BRCA1 gene brings.Taylor said she is taking the mantra for new moms to “sleep when the baby sleeps” to the extreme because of the fatigue brought on by the chemotherapy. She also, like Elsie, now has little to no hair because of the treatment.”Now that we’re in month three, I feel like the shock has finally worn off and I’m able to connect with Elsie on the more maternal level,” Taylor said. “I’m better able to balance the cancer treatment with motherhood.”Taylor’s chemotherapy has also put her into menopause, not something most women experience after giving birth.”I don’t know what normal is because I went from pregnancy to medically-induced menopause,” she said. “I have hormones all over the place.”Taylor’s doctor, John Farmer, a surgeon and founder of Breast Health Specialists of Oklahoma, said Taylor’s diagnosis is a good reminder that breast cancer affects younger people too, including women of childbearing age.Pregnant woman in particular need to pay attention because breast cancers are sensitive to hormones and pregnancy brings on a surge of hormones, according to Farmer. He noted too that breast lumps in pregnant women may be hidden, overlooked or passed off as a pregnancy-related change.”During pregnancy, if there is a self-perceived change in the breast, that really needs to be chased, it needs to be evaluated and monitored throughout the pregnancy,” he said, adding that women with a history of breast or ovarian cancers in their family need to be extra vigilant. “We know that breast cancers will continue to progress if left untreated.”Taylor has shared her cancer journey on Instagram and said the community there has shown her first-hand the need to break the stigma that breast cancer is an “older person’s disease.””Every day probably 10 to 15 women my age reach out to me either newly-diagnosed with breast cancer or having gone through it,” she said. “It’s empowering that women are supporting women through this very tough journey but it’s also devastating that this is something new moms are tackling at all.”Taylor talks and texts daily with a group of around seven breast cancer-battling women she met on social media — including one with her same diagnosis with a child Elsie’s age — to share motivation and trips and tricks.Because Taylor was diagnosed on Elsie’s birthday, she is marking her post-cancer milestones by her daughter’s growing up milestones.”My hope is at her first birthday I have a short pixie and we don’t have to talk about cancer at all because there are no more appointments or tests,” Taylor said. “My doctor said the goal is at Elsie’s fifth birthday I’ll be able to fire him.” Copyright © 2019, ABC Audio. All rights reserved.