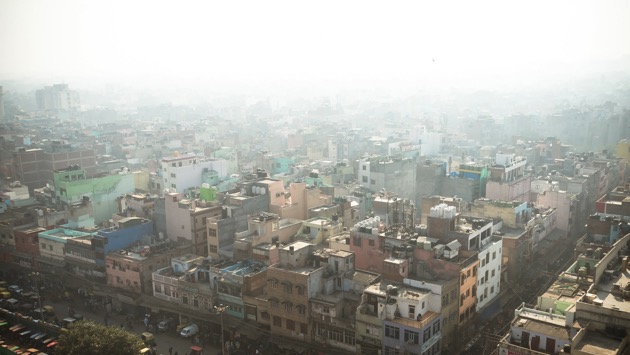 Diy13/iStock(LONDON) — The government of New Delhi has turned to rationing car-use in an attempt to reduce air pollution, which reached its worst level this year over the weekend.Air pollution on Sunday hit a record high when the concentration of tiny particles in the air, called PM2.5, hit over 900, way over the 500-level that qualifies as “severe-plus.” The air quality index reached 568 that day. In the U.S. EPA says people can begin to experience side effects when air quality exceeds 50.The 46 million people who live in the greater Delhi area were advised to stay indoors with the windows closed to avoid breathing the toxic smog, and dozens of flights were diverted from Delhi airport on Sunday due to poor visibility.The rationing scheme, called “Odd Even” means that cars with an odd and even license plate numbers will only be allowed to drive in the capital on alternative days. The restrictions will remain in place until at least Nov. 15.Nearly 200 teams of the Delhi Traffic Police have been deployed and 5000 volunteers were recruited to help inform other citizens about the plan, according to local outlet New Delhi TV.”Be the change you wish to see in the world” tweeted chief minister of Delhi, Arvind Kejriwal. “I am glad every Delhiite is happily participating in Odd Even and represents the change that Delhi wishes to see. I too carpooled with my Ministers to work today. We will alternate between my car and theirs for the rest of Odd Even.”

“Be the change you wish to see in the world”I am glad every Delhiite is happily participating in Odd Even and represents the change that Delhi wishes to seeI too carpooled with my Ministers to work today. We will alternate between my car and theirs for the rest of Odd Even pic.twitter.com/I0gfQ260zV

Such strategies have been used before, but it is unclear how effective it is in combatting city pollution. Air pollution is not a new phenomenon in India, with schools closed and air traffic brought to a halt in previous years. The Environment Pollution (Prevention and Control) Authority has called it a national crisis.In a report in October, the Authority said that although New Delhi had made improvements to its air quality, the “city still needs to reduce pollution levels by 65 percent to meet the national air quality standard.”Kejriwal thanked his fellow Delhiites for cooperating with the plan but also drew attention to agricultural burning in the provinces around Delhi, which he claimed was a major source of pollution but that his city government can’t control.“There is little that the people of Delhi can do to fight pollution due to crop stubble burning happening in Haryana and Punjab, which is a major contributor to pollution in Dehli in the months of October and November,” wrote Kejriwal in a letter to the Indian Minister of Environment in September, in which he asked for help with a coordinated national response.“Stubble burning is indeed a huge problem that explains seasonal extremes like the current crisis,” said Dr. Elizabeth Chatterjee, a lecturer in Regional and Comparative Politics at Queen Mary University of London. “Delhi will struggle to solve this alone, because stubble burning is dispersed across rural areas around the city. Tackling it would demand collaboration from a whole host of other Indian state governments.”But, she added, “[t]he jury is still out on whether the odd-even policy actually works.” Economists at the University of Chicago suggest it was effective in January 2016, but less so when used again in April 2016.The Supreme Court, which has been monitoring the air pollution crisis in India, said on Monday that the state was only interested in “gimmicks” and has ordered the state government to produce data to prove that the car rationing system works, according to the BBC. It also summoned the heads of neighboring states to answer questions about stubble burning.”Delhi is choking every year and we are unable to do anything,” said Supreme Court Justice Arun Misha. “The state machinery is not acting… They are passing the buck to each other… Everybody is interested in gimmicks and elections.”“The Supreme Court’s role is interesting,” said Chatterjee. “In recent years it has sometimes been in the vanguard of pushing for environmental protections, and now it’s chastised other North Indian state governments for failing to combat stubble burning. But actually forcing state governments to comply is a very tall order in India’s fractious federal system.”“As ever in India, talk comes cheap, but implementation remains the big problem,” said Chatterjee. “Of course, this is an easy way for the court to look popular and responsive at a time when many people have criticized its reluctance to challenge the government’s actions in Kashmir,” she added.Changing weather in New Delhi means that air quality is likely to improve during the week according to the Central Pollution Control Board – but only from severe+ to severe – while India Today reports that over 40 percent residents of the greater Delhi area want to move to another city because of bad air quality.Copyright © 2019, ABC Audio. All rights reserved.