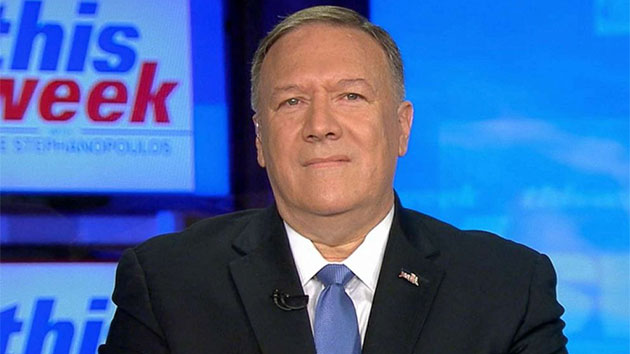 ABC News(NEW YORK) — Newly released testimony of Secretary of State Mike Pompeo’s former senior adviser directly contradicts Pompeo’s remarks in an interview last month on ABC’s “This Week.” According to deposition transcripts released by House Democrats on Monday, Pompeo aide Mike McKinley told lawmakers under oath that he approached Pompeo three separate times to voice his concerns over the State Department’s lack of support for Ambassador Marie Yovanovitch.Yovanovitch was recalled from the top post in Ukraine last spring. President Donald Trump later called her “bad news” in a July phone call with the Ukrainian president and said that “she’s going to go through some things,” according to the rough transcript that the White House released.McKinley said he wanted the State Department to issue a statement in support of Yovanovitch and talked to Pompeo about it.”I was concerned about what I saw as the lack of public support for Department employees,” he told Congress.When asked what Pompeo’s response was, McKinley said that the secretary said nothing.After McKinley’s requests for a statement of support went unanswered by Pompeo, McKinley resigned, according to the deposition.In his final discussion with Pompeo after his Sept. 30 resignation, McKinley said he was “pretty direct.””Across the 8 or 9 days, whatever period it was, that I was seeking to raise this, nobody ever really said anything to me,” he said.But in an Oct. 20 interview on “This Week,” Pompeo denied McKinley ever expressed his concerns.”You know, from the time that Ambassador Yovanovitch departed Ukraine until the time that he came to tell me that he was departing, I never heard him say a single thing about his concerns with respect to the decision that was made,” Pompeo told ABC News Chief Anchor George Stephanopoulos.”So you were never asked?” Stephanopoulos asked.”Not — not — not once — not once, George, did Ambassador McKinley say something to me during that entire time period,” Pompeo answered.Stephanopoulos made one last attempt to clarify the events.”You were never asked to put out a statement in support of Ambassador Yovanovitch?” Stephanopoulos asked.”George, again, I’m not going to talk about private conversations that I had with my most trusted advisers,” Pompeo said.In a Sept. 22 interview with “This Week” Co-Anchor Martha Raddatz, Pompeo was asked if he knew about the conversations between Trump and President Volodymyr Zelenskiy of Ukraine.He said, “I think I saw a statement from the Ukranian foreign minister.”Pompeo has since confirmed that he was on the phone call.The State Department did not immediately provide comment. Copyright © 2019, ABC Audio. All rights reserved.