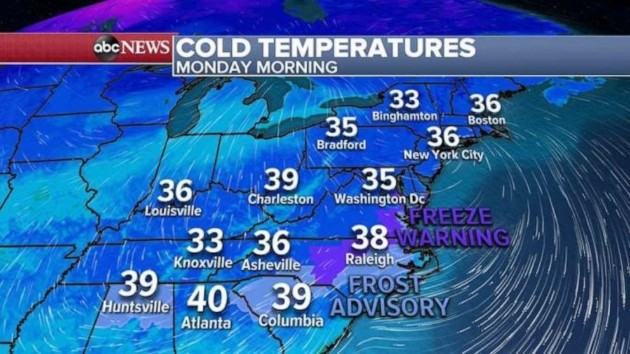 ABC News(NEW YORK) — It has been a very warm fall so far in the Eastern U.S., but this warmth is ending very quickly as several shots of arctic air are moving in. Already this weekend, the coldest air of the season has moved into the East Coast and the Deep South with snow flying near the Great Lakes. Some areas in western New York and south of Buffalo saw up to 5 inches of snow making it look like winter. On Monday morning, the coldest air of the season stretches from Birmingham, Alabama to Boston, Massachusetts, where the actual temperatures are in the 30’s.After Monday’s chill, the East Coast will get a break for a few days as a new arctic blast moves into the Midwest and the Great Lakes Wednesday into Thursday. Some of this cold air will spill into the Northeast by Thursday morning. This will be, by far, the coldest air of this fall season so far. As this new dose of cold air spills east, a storm system will develop in the southern Plains on Wednesday and will track across the Ohio Valley and into the Northeast on Thursday evening. This storm system will interact with colder air spilling into the area and places from the Midwest to the Northeast could see its first snow of the season.By Thursday night, the storm system will move into the Northeast, and it is possible that many areas from Pennsylvania to upstate New York and into New England could see some snow, while places along I-95 will see mostly rain. We have to wait and see exactly who will see what precipitation, because this is still far away and not all models are agreeing on this storm system bringing accumulating snow.