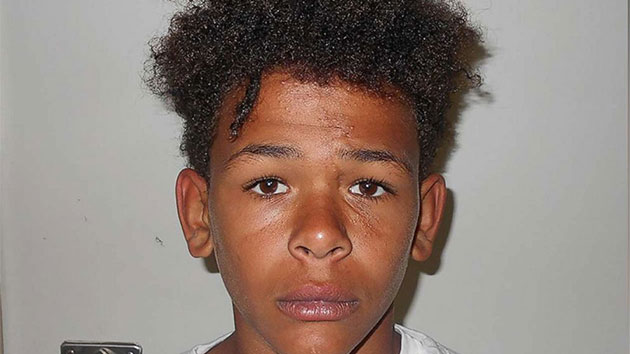 North Carolina Department of Public Safety(LUMBERTON, N.C.) — A 13-year-old boy who was charged with two counts of first-degree murder and robbery with a dangerous weapon escaped from law enforcement on Tuesday after a court appearance in North Carolina, officials said.The boy, identified only as Jericho, was in Robeson County Department of Social Services at 12:10 p.m. for a hearing when he managed to break free, according to a press release from North Carolina Department of Public Safety and spokesman Matthew Jenkins. The department of social services is where the juvenile courthouse is located, Jenkins told ABC News.The law enforcement agency said officials “have a high degree of concern for the safety of both the juvenile and the public, due to a prior history of assaultive and unpredictable behavior.”He was last seen at the intersection of Hwy 72 and Country Club Rd. in Lumberton, which is located about 35 miles south of Fayetteville, according to the sheriff’s office.When he was at the juvenile courthouse, he was wearing a white T-shirt, beige pants and leg restraints without any shoes, the sheriff’s office said.The teenager has been housed at the Cumberland Juvenile Detention Center since Oct. 14, according to police.Helicopters have been deployed in the search and numerous sheriff’s departments, U.S. Marshals from Wilmington and Fayetteville, and the local police are out looking for the boy.The details of his case were not immediately clear.ABC News does not normally identify juveniles, but is doing so in this case because authorities have released his image and are asking for the public to report any sightings of him. The Robeson County Sheriff’s Office cited NC General Statue 7B-3106 as to why they are releasing his information. Copyright © 2019, ABC Audio. All rights reserved.