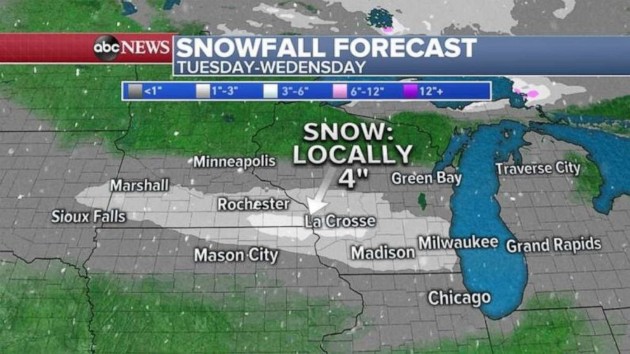 ABC News(NEW YORK) — Thirty cities in the eastern U.S. had its warmest October on record and now we go from that to winter-like weather. The next several days will feel like a frigid slap in the face for millions east of the Rockies. Before the arctic blast, we have to watch two storm systems moving east with snow and heavy rain. The first storm system will bring mostly snow to the Great Lakes and Upper Midwest with some areas getting close to 4 inches of snow. On Tuesday morning, four states from Minnesota to Michigan are under a Winter Weather Advisory for the snow to come later Tuesday into Wednesday morning.A second storm system will develop in the southern Plains Wednesday night and will spread heavy rain from Oklahoma to Missouri for Thursday morning. Some flash flooding is possible as some areas could see more than 3 inches of rain. To the north of the rain where the cold air is in place, snow will develop from Chicago to Detroit. It is still uncertain how much snow major Midwestern cities will get but there is a chance for the first accumulating snow in Chicago and Detroit on Thursday.By Thursday evening, the storm system will move quickly into the Northeast bringing the first significant snow to the eastern Great Lakes from Cleveland to Erie, Pennsylvania and into Buffalo, New York and into northern New England. South of there, most major cities along I-95 corridor will be warm enough for just rain.What is certain is that a major cold blast is on the way end of the week into the weekend from the Plains to the Northeast and even into parts of the South.