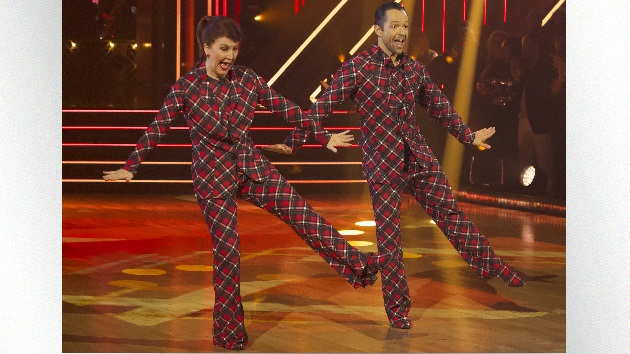 ABC/Kelsey McNeal(NEW YORK) — Monday’s Dancing with the Stars once again rattled fans with another shocking elimination: fan-favorite Kate Flannery.  For a third time in a row, the night ended on a sour note as the judges huffed over who the audience sent to the bottom two.  Alongside Flannery stood Ally Brooke, who earned the first perfect score of the season.

The judges were unanimous in their decision to save Ally, but not without dishing out some choice words to the show’s voters first.

Despite the dour ending, the night celebrated the first two perfect scores of the season, earned by Brooke and James Van Der Beek.

Brooke dazzled the judges with her dramatic Paso Doble to her song “Higher” while Van Der Beek stunned with his emotional contemporary to Journey’s “Don’t Stop Believin’.”  Happily, the judges awarded them straight 10s, along with heaps of praise.

However, both competitors finished the night with a score of 32/30.  On top of celebrating the night’s theme of earliest motivations, couples were given the opportunity to bag two extra bonus points if they won a dance off against another couple.

Since Van Der Beek was last week’s first place finisher, he was immune from the dance off and was handed the bonus points by default.  Brooke, on the other hand, battled it out with Kel Mitchell — who can boast about scoring the first 10 of the season — to a jive of Queen’s “Don’t Stop Me Now.”  The former Fifth Harmony singer emerged victorious after an intense debate erupted between judges Carrie Ann Inaba, Bruno Tonioli, and Len Goodman, who struggled to declare a winner as both were evenly matched.

One competitor came close to securing a perfect score on Monday: former Bachelorette Hannah Brown.  Last week, the 25-year-old opened up on Instagram about the emotional slump the show put her under, but she rebounded with the “comeback of the season,” as declared by Judge Bruno.  Her quickstep to Tom Petty’s “American Girl” practically radiated with with joy as she danced perfectly in sync with partner Alan Bersten.  She collected two 10s and one nine, unsurprisingly from Judge Len, with a score of 29/30.

However, she also collected two extra bonus points with her booty-shaking salsa dance off against country star Lauren Alaina, bumping her final total up to 31/30.

Like clockwork, the worst dance of the night came from Sean Spicer.  The judges openly remarked about their confusion as to how the former White House Press Secretary continues to dodge the bottom two week after week.  “When it comes to fish out of water, nobody does it better,” shrugged Tonioli when critiquing Spicer’s campy jazz routine to Styx’s “Come Sail Away.”

Despite earning the lowest score, 20/30, the former press secretary did show some improvement since last week’s critically panned jive to “Monster Mash.”  The judges credited his performance to new dance partner Jenna, who forced the 48-year-old out of his comfort zone.  Spicer’s original dance partner, Lindsay Arnold, was unable to compete for the night because she unexpectedly lost her step-mother and needed to be with her family.

Dancing with the Stars returns next Monday, November 11, at 8 p.m. ET on ABC. Next week will celebrate a deliciously 90s “Boy Band and Girl Group Night” with two celebrity guest stars: Emma Bunton from the Spice Girls along with DWTS season four runner- up Joey Fatone from N*SYNC.

Here are the current standings: