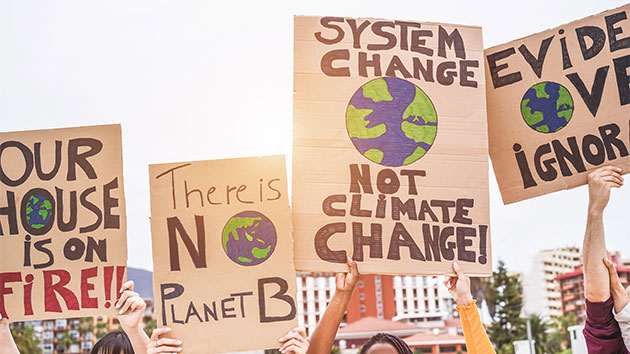 DisobeyArt/iStock(NEW YORK) — Jane Fonda appeared on “The View” Tuesday where she spoke about being arrested during environmental protests and blamed the fossil fuel industry for climate change, which she calls an “urgent crisis.” The Academy Award-winning actress and longtime activist — dating as far back as the Vietnam War — said that 16-year-old climate activist Greta Thunberg, who testified in front of Congress in September, inspired her to protest every week in Washington, D.C. in what are known as “Fire Drill Friday” protests. She told ABC News in October that she had vowed to attend them in an effort to bring awareness to the impacts of climate change.Fonda, 81, has been arrested four times for protesting since her first arrest on the steps of the U.S. Capitol on Oct. 11. She was last arrested for protesting on Nov. 1 and subsequently spent a night in jail.”The conditions weren’t great for old bones like mine on a metal slab,” Fonda told “The View” about her night in jail.Fonda explained that she is taking cues from younger generations, who she said are inspiring due to their constant work to bring awareness to environmental issues.”I’m following what the young people are doing. I’m not telling them. They are inspiring me,” Fonda said. “All of these people are leaving school to protest the future that we’re taking from them and they’re a huge inspiration to me.””Seeing these young people carrying the burden of protesting the fossil fuel industry, I say, ‘No, we’ve got to get out there and join them,"” she added.Other actors have joined in on the weekly climate change events, including Ted Danson, 71, who was arrested along with Fonda in zip-tie cuffs on Oct. 25.”The View” co-host Abby Huntsman asked Fonda about “all the peaceful protests that have led to change” that didn’t involve protestors getting arrested like they have at “Fire Drill Friday” events, and expressed concern about living in an uncivil society.While Fonda agreed that getting arrested is a risk, she said it was one she was willing to take.”Climate activists have been doing this for 40 years. We’ve been writing articles and we’ve been giving speeches. We’ve been putting the facts out to the American public and politicians, and we’ve marched and we’ve rallied peacefully,” she said. “The fossil fuel industry is doing more and more and more to harm us and our environment and our young people’s futures.””We have to up the ante and engage in civil disobedience, which means risking getting arrested,” Fonda added. “It’s going to require more and more people like all of you in the streets demanding.”Fonda also doubled down on holding major fossil fuel companies responsible for a large part of global warming. “Don’t blame anybody except the fossil fuel industry” for today’s climate crisis, she said, adding that “they try to make us feel guilty.””We are the last generation who can make the difference between life and death of the planet,” Fonda said. “It is an urgent crisis and we have very little time [to fix it].”On Monday, the Trump administration notified the United Nations of its withdrawal from the historic Paris climate accord. The move will take effect one day after the 2020 elections on Nov. 4, 2020.The agreement, which has now been signed by nearly every nation on earth, seeks to limit global temperature increases to less than 2 degrees Celsius, with each country setting its own non-binding emission targets and reporting on its progress to reduce them.