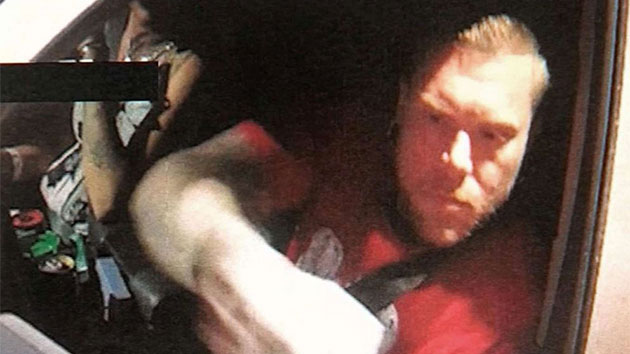 Kleberg County Sheriff via KXII(PADRE ISLAND, TX.) — Texas authorities are searching for a man who they said fled to Mexico after allegedly stealing an RV belonging to a couple whose bodies were found in a shallow grave.A felony theft arrest warrant was issued for 33-year-old Adam Curtis Williams on Tuesday, authorities said. He’s considered armed and dangerous and may have absconded to Mexico with Amanda Noverr, a person of interest, authorities said. Williams is wanted in connection with the deaths of James Butler, 48, and his wife, 46-year-old Michelle Butler, whose bodies were discovered on Padre Island, along the southern coast of Texas, on Oct. 28.The remains of the New Hampshire couple were found one day after deputies, following up on a lead, noticed a bra covered in sand sticking out of the side of a dune, Kleberg County Sheriff’s Lt. David Mendoza said Monday. Authorities then launched a double homicide investigation.Police say Williams is the man seen driving the Butlers’ RV across a checkpoint in Mexico in surveillance footage from Oct. 21. Police believe Noverr is the passenger seen in the footage, but have no elaborated on her connection to the couple.The Butlers, who were on a cross-country road trip, were last seen on Oct. 15 as they left the Padre Balli Park, Mendoza said.The next day, Michelle Butler posted to social media that they had “just arrived at their new home for the next couple of weeks” before they were to set out to Ft. Lauderdale, Mendoza said.Williams has not been charged for the Butlers’ deaths and no arrest warrant has been issued for Noverr at this time, authorities said Tuesday. Both are believed to be from the Utah area, authorities said.Anyone with information about their whereabouts is asked to call the Kleberg County Sheriff’s Office at 361-595-8500.Copyright © 2019, ABC Audio. All rights reserved.