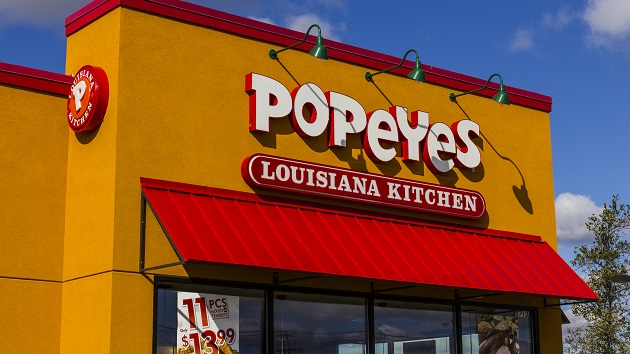 jetcityimage/iStock(OXON HILL, Md.) — A 28-year-old man was stabbed to death at a Popeyes in Maryland on Monday night after a fight over the restaurant’s chicken sandwich, police said.The stabbing happened at the fast-food chain’s location in Oxon Hill, Maryland, about 12 miles south of Washington, D.C. Two men began arguing apparently after one accused the other of cutting in front of him in line while waiting to order the chicken sandwich, a popular menu item that returned to Popeyes restaurants nationwide on Sunday.The squabble spilled into the parking lot outside the packed restaurant where one of the men was stabbed. Police were called to the scene around 7 p.m. local time, and the victim was rushed to a local hospital where he was pronounced dead about an hour later.”Our homicide detectives are hard at work on this one, but we have been able to determine preliminary that this is related to the release of the sandwich here at this restaurant,” Prince George’s County police spokesperson Jennifer Donelan told reporters at a press conference Monday night.”For you to get that angry over anything,” Donelan added, “and to develop into this type of violence, again, is a very sad and tragic day.”The suspect is still at large, and police are asking for the public’s help in identifying him.”We are looking for a male, and that male knows who he is,” Donelan said. “He knows what he did here tonight, and he needs to do the right thing and he needs to step up and turn himself in.”ABC News has reached out to Popeyes for comment. Copyright © 2019, ABC Audio. All rights reserved.