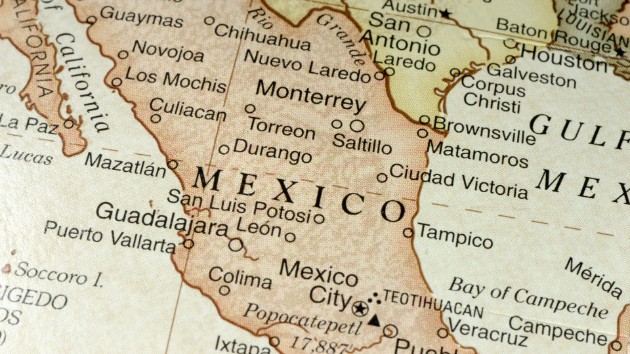 KeithBinns/iStock(NEW YORK) — At least nine members of an American family, including six children, were killed in an attack in northern Mexico on Monday, the Mexican military confirmed Tuesday morning. The family was traveling from Galeana, Chichuahua, to Bavispe, Sonora, between 9:30 a.m. and 1 p.m. local time when they were ambushed by an armed group, according to Public Safety Secretary Alfonso Durazo. The area where the family was attacked is less than 100 miles from the Arizona border. Speaking at a press conference Tuesday, Durazo said the area where the attack took place is of territorial dispute by several cartels and it’s possible the family’s convoy of cars was mistaken for one. The family members, who were U.S. citizens but lived in a Mormon community in the Mexican border state of Sonora, were driving to a wedding in Chihuahua state, according to family member Leah Staddon, who was born and raised in the same community but now lives in Arizona. Three women and six children were killed in the ambush. Six other children survived the attack and were left injured, while another remains missing, according to Durazo.Staddon said her family, although American, has lived in Mexico for decades and they are all dual citizens. “Everyone’s just in complete and utter shock,” she told ABC News. “It has been pretty violent down there for a while and now that it has hit our family, I just want people to know out here how bad it has gotten.”Another relative, Julian LeBaron, told ABC News he went to the scene with authorities to help collect the bodies of the dead and look for the ones who survived. LeBaron confirmed that several women and children were among those killed. Mexico’s Secretariat of Security and Civilian Protection announced via Twitter the “strengthening of the state force” in the community, Bavispe, “following the allegations of disappearance and assault of several people traveling to La Mora.” Members of the country’s national guard, army and state police have been deployed to the region to conduct a “search operation,” the agency said.When asked for comment, a spokesperson for the U.S. Department of State told ABC News, “We are aware of these reports. The safety and welfare of U.S. citizens abroad is among the Department of State’s top priorities. When a U.S. citizen is missing or passes away overseas, we engage with local officials at multiple levels and provide all appropriate consular assistance.” U.S. President Donald Trump took to Twitter on Tuesday morning to address the attack and offered to help Mexico flush out “these monsters.” “This is the time for Mexico, with the help of the United States, to wage WAR on the drug cartels and wipe them off the face of the earth,” Trump tweeted. “We merely await a call from your great new president!” Claudia Pavlovich Arellano, the governor of Mexico’s Sonora state, also mentioned the attack in a tweet Tuesday, vowing to use all her power to not let the crimes go “unpunished” and to make “those responsible pay.” “I don’t know what kind of monsters dare to hurt women and children,” Pavlovich tweeted. Copyright © 2019, ABC Audio. All rights reserved.