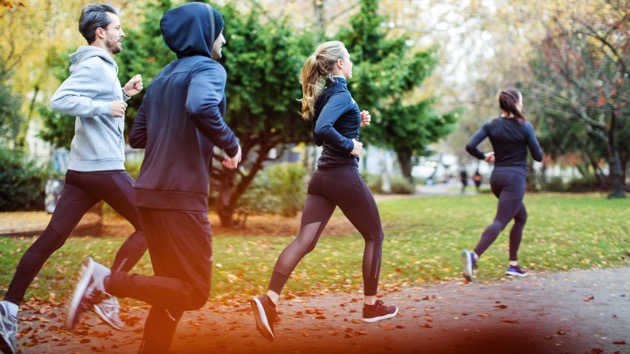 alvarez/iStock(NEW YORK) — Running isn’t just good for a person’s day-to-day health and well-being, it may ward off an early death, new research has shown.Being a runner — even an casual one — was associated with a 27 percent lower risk of mortality, according to a meta-analysis published in the British Journal of Sports Medicine.The review, which analyzed 14 studies that included 232,149 participants, found that running also was associated with a 30 percent lower risk of cardiovascular death and a 23 percent lower risk of cancer death.”Even relatively small doses of running can improve your health,” said Zeljko Pedisic, lead author of the study and associate professor at Victoria University in Australia. “If you are physically inactive and don’t have much time on your hands for exercise, running might just be the right activity for you.”The researchers found that running as little as once a week, or 50 minutes per week, significantly reduced runners’ risk of death. Since there wasn’t data from the original studies on individuals who ran less frequently than that, researchers were unable to determine if there would have been similar mortality gains for more sporadic runners.Higher levels of running, on the other hand, weren’t necessarily associated with greater mortality benefits, the researchers wrote.Notably, the frequently and duration of running researchers found to be associated with improved mortality is lower than the 150 minutes of weekly exercise that the Department of Health and Human Services currently recommends for Americans.Pedisic said he hoped that the study would both encourage those who aren’t physically active to become so, while motivating regular runners to keep training.Since safe and accessible public spaces could prompt the public to run or exercise more frequently, Pedisic added that “our findings can also be used to encourage policymakers to improve public infrastructure for running.”Copyright © 2019, ABC Audio. All rights reserved.

The danger of the ‘strong Black woman’ trope for mental health

Four more cases of ‘monkeypox’ reported in the UK: What to know

Without COVID-19 vaccines, death toll would be much higher: Pfizer analysis